To spread love during the COVID-19 pandemic, Heavenly King Aaron Kwok (郭富城) will be live-streaming his “Aaron Kwok Cheer up & Dance Online Charity Concert 2020” <郭富城鼓舞·動起來 Online Concert 2020> for free tomorrow, May 9, 2020 (5 p.m. to 6 p.m. HKT). Through the virtual concert, the 54-year-old pop star hopes to show support and raise money for professional dancers and workers in the film industry during this global pandemic. 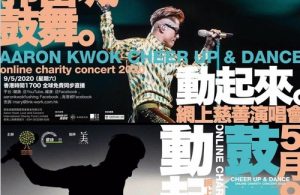 The charity show, which can be enjoyed worldwide, will be live-streamed on over 49 platforms, including YouTube and TOPick’s Facebook. Given the time difference around the world, the concert film will remain online for 24 hours so everyone can enjoy it.

Due to social distancing restrictions, the performance location, Habour City, will be under strict surveillance to ensure that only working staff members are present. As such, the concert host announced that the general public is forbidden from showing up at the concert location, and instead, fans should watch the performance online.

Legendary musician Sam Hui (許冠傑) already shared that he will tune into the concert from his home, and he hopes the concert will be a success. Aaron previously shared that Sam’s earlier concert, which was held to show Hong Kong and the music industry support during this time, inspired him to do the same.