Ada Choi is Not a Tiger Mom 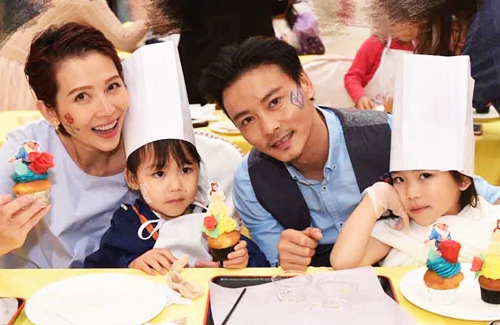 Since shifting her career to Mainland China, Ada Choi’s (蔡少芬) Hong Kong projects has decreased significantly. Her last project with TVB, Beauty at War <金枝慾孽貳>, was in 2013. Most recently, Ada was invited by Wong Cho Lam (王祖藍) to take part in the third installment of his franchise series, Oh My Grad <老表，畢業喇！>. The drama focuses on the educational system in Hong Kong. The real-life mother of two portrays an overbearing Tiger mom.

In real life, Ada does not believe she is a Tiger mom. Instead, she plays an active role in her children’s lives and often does homework with them. Ada also volunteers at her daughters’ schools despite her busy work schedule. She shared, “I usually play with my daughters a lot. When it comes to homework and dinner time, I become more strict. One time when my daughters were distracted during homework, I have tried slapping the table before!”

Ada’s husband, Max Zhang (張晉), also has a strict side. “After he said something a few times gently and our daughters continue to horse around, he would loudly exclaim, ‘So what? You two aren’t going to do it?’ It would surprise me! I would think to myself that he should give them a few more chances before raising his voice.”

Ada and her Oh My Grad costar, Roger Kwok (郭晉安), last collaborated 17 years ago in At the Threshold of an Era (創世紀), where they portrayed a couple. During filming breaks, the duo would share tips on raising children. Ada said, “We would share stories about how to handle problems with our children, because our children are around the same age. Before, I thought Roger was a goody-two-shoes. After starting a family, he continued to be more caring towards his family. He never shed his “good  man” image.”