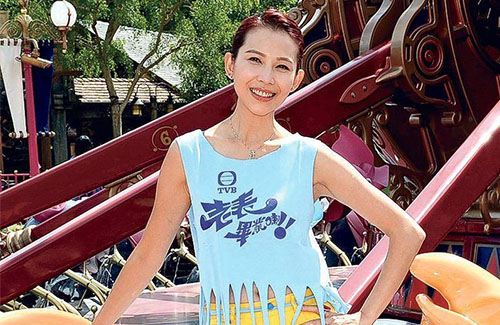 At a promotional event for Oh My Grad <老表，畢業喇！> earlier this month, Ada Choi (蔡少芬) spoke up about her appreciation for the series and some life lessons she’s learned while filming for the show. The 44-year-old mother of two girls said the show, a story about the teachers and their students within a fictional college, taught her a lot about what it means to be a parent and to understand her children.

Her older daughter Zoe, who is six years old, is currently attending primary one. Ada said little Zoe already has an admirer, and lamented that she didn’t even know what it means to have a crush until she was at least 8 years old. “Her classmate told her that he likes her, wants to kiss her, and get married to her. I didn’t even know what all of that meant until I was at least in primary three. I told my daughter that, if one day a boy does want to kiss her, cross your arms into an ‘X’ and kick him away! Learn how to protect yourself! She knows now that the only people who can kiss her are her parents and sister.” She then added jokingly, “It’s unfortunate that she’s as pretty as me. It’s dangerous!”

The Oh My Grad event—which was held at Disneyland—was Ada’s first promo event for the show since the drama premiered on September 25. Previous promotional events were attended by her costars Roger Kwok (郭晉安) and Wong Cho-lam (王祖藍), but due to work obligations, Ada was unable to attend an event until now.

“My schedule was already packed,” explained Ada. “I had to do many interviews in advance, because I wouldn’t be in Hong Kong. Now that I’m here, it’s time for Roger and Cho-lam to take a rest.”

Both Roger and Cho-lam were absent this time around. Roger fell ill, while Cho-lam had a schedule to attend.

“This is my show so I will definitely dedicate my heart and power to promote it,” stressed Ada. “I’ve seen how hard people have worked on it, so I hope the audience will like what we’ve made.”

“The Gem of Life” Gave Ada a Hoarse Voice

Reporters pointed out that Ada’s voice sounded much hoarser and weaker on Oh My Grad, and Ada said the hoarse voice was due to the vocal strain she experienced while filming for 2009’s The Gem of Life <珠光寶氣>.

“I broke my voice after filming The Gem of Life, so my voice gets hoarse whenever I don’t get enough sleep. It can’t be helped. When I was filming the show, I got sick, but I still had to yell. After all, my character was kind of crazy. I screamed so much that it broke my voice. I ended up getting a blood blister and had to get it removed. I didn’t get much rest after that because we were on a tight filming schedule. Unless I get a lot of good sleep, it won’t be completely cured.”