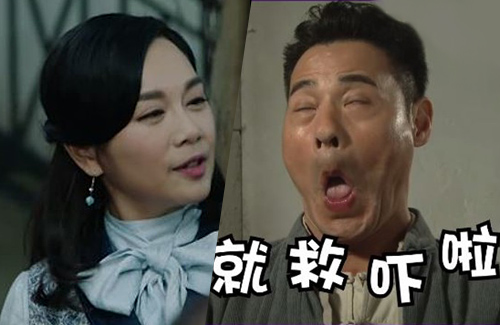 TVB recently released outtake scenes from The Ghetto Fabulous Lady <福爾摩師奶>, in which Adia Chan (陳松伶), Ben Wong (黃智賢), Alice Chan (陳煒), and Kaman Kong (江嘉敏) were seen fumbling their lines. Since the drama is a mystery, the cast often have difficult and long lines to remember. The cast did not mind the outtakes and felt that they added humor and lightened the atmosphere during filming.

In the video clip of the outtakes, Adia and Alice had a dialogue exchange when Ben suddenly burst into the room too early. Adia immediately played along to the mistake by asking why Ben is like this. Aside from wrong entrances, the cast also loved to make funny faces when rehearsing certain lines.

The funniest moment was when Tsui Wing (徐榮) had a scene with Adia, in which he asked Adia who Sherlock Holmes was. She forgot the line and immediately responded that he was from Fujian, as the sound was similar to Sherlock Holmes’ Chinese name.

The cast showed their great sense of humor, including Dickson Yu (余德丞) and Kaman Kong. In a scene where Kaman was hugging Alice, Dickson wanted to join the embrace but he was rejected. Many netizens complimented him for his natural acting and the humor it created. Kaman was caught dancing while sitting on a stool. She even commented on the video by saying, “Wow, who filmed me dancing?”

The clip ended with Adia, Ben, and Kaman posing with funny faces, showing how well the cast bonded during the filming. Adia and Kaman even developed a deep friendship off-camera, and Adia continues to call Kaman her “daughter” after the drama completed filming.