All Hail the Queen: Nancy Wu Films “House of Spirits” 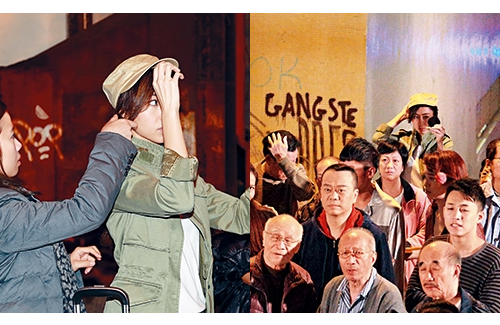 The 2015 Hong Kong TV awards season ended in December with a surprising twist as Nancy Wu (胡定欣) took home the TV Queen crown for her performance in Ghost of Relativity <鬼同你OT>, beating out tough competitors Kristal Tin (田蕊妮) and Liza Wang (汪明荃). The Best Actress winner immediately went on to treat her friends, staff, and colleagues to a luscious dinner after ascending the throne, but she did not forget to save some time for her best friend Myolie Wu (胡杏兒), who got married last week.

A few days ago, the cast of House of Spirits were spotted shooting an outdoor scene. Nancy was one of the last to arrive at the filming site. Reporters observed that a female assistant and a personal makeup artist followed Nancy around at all-times, consistently touching up her makeup, hair, and outfit in between takes.

After shooting House of Spirits, Nancy will reunite with her Ghost of Relativity costars in February to film the new drama, You Who Came From the Meow Meow Star <來自喵喵星的妳>.

2 comments to All Hail the Queen: Nancy Wu Films “House of Spirits”