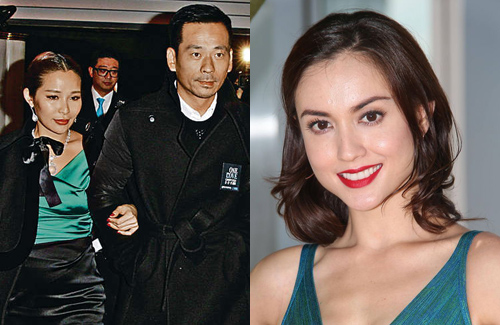 Above: Although Alvin Chau is married to Heidi Chan, his girlfriend Mandy Lieu is also pregnant.

Model Mandy Lieu’s (劉碧麗) extramarital affair with casino tycoon Alvin Chau (周焯華) is becoming more complicated by the day. Although Alvin is married to Yan Oi Tong executive Heidi Chan (陳慧玲), he continues to visit Mandy in Singapore. In December, it was discovered that both Mandy and Heidi were four months pregnant. Rumors claim that Heidi is carrying twins, while Mandy is carrying a baby girl.

Mandy’s manager confirmed the model’s pregnancy last week and stressed that Mandy has already left Hong Kong to rest overseas. Though it appeared on the surface that Alvin had chosen to end his relationship with Mandy—opting to spend more time with his wife—reporters who have followed Alvin’s family to Thailand observed that Alvin and Mandy’s relationship is not over yet.

On the other hand, Alvin and Heidi are encountering some relationship problems, giving each other the cold treatment. Heidi showed off her “official wife” status by preventing Alvin from seeing Mandy during the Christmas holidays. A source close to the Chau family said Heidi invited the entire family and a few close friends to a week-long trip in Thailand during the Christmas holidays. The trip was also an opportunity for the family to celebrate the birthday of Alvin’s father, whom Alvin respects very much.

The family left on December 24, Christmas’ Eve. They went to Pattaya and stayed at the five-star hotel Royal Wing Suites & Spa. Heidi and her family stayed in a suite for $16,200 HKD a night.

Heidi and her family thoroughly documented their trip with photos and uploaded them on Facebook. One photo was a selfie of Alvin and Heidi, but reporters who were following the Chau family said the couple rarely interacted unless necessary. Heidi was seen spending more time with her daughter and her father-in-law, while Alvin spent more time with his son and friends. Heidi and Alvin also boarded different minivans when going to a restaurant for dinner.

Heidi managed to keep Alvin for a few days, but on December 29, reporters spotted Alvin leaving for Singapore without his family. It was said that Alvin left to visit Mandy, who is staying in Singapore.

Heidi and her family returned to Macau from Thailand on December 30.

Alvin’s colorful dating past involved numerous Hong Kong celebrities. Alvin had dated actress Ellen Chan (陳雅倫) in 2009. Because of Alvin, it was said that Ellen broke up with casino CEO Mark Brown.

A source close to Ellen said that Alvin started to pursue Ellen when she was struggling with her long-distance relationship with Mark Brown, who left Hong Kong for work in the United States.

Alvin and Ellen’s relationship ended half a year later. Alvin had kept it a secret that he was already engaged to Heidi and had children. Ellen was heartbroken when she heard the news and broke up with him. When she was later asked about her relationship with Alvin, Ellen said they were “just friends”.