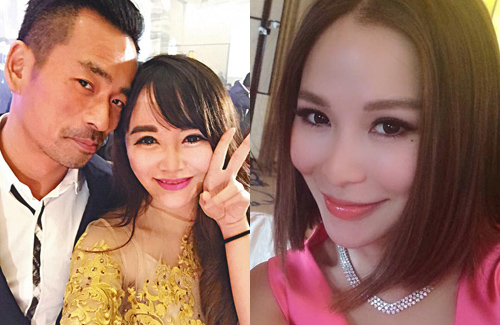 Macau casino tycoon Alvin Chau (周焯華) has a long legion of lovers. Known for his generosity, Alvin attracted many female celebrities. His pregnant wife, Heidi Chan (陳慧玲), accepts his infidelity and remains confident in her own status as Mrs. Chau. Commenting on Alvin’s latest gossip, Heidi remarked that it is not uncommon for men to cheat.

Mandy Lieu Did Not Suffer Miscarriage

One of Alvin’s most high-profile lovers is model/actress Mandy Lieu, who is currently six months pregnant. Spotted looking much slimmer earlier, Mandy sparked speculations that she had a miscarriage. However, it turns out that Mandy is still pregnant, as she was spotted with a baby bump just last week. Wearing loose-fitting clothes, Mandy immediately held her laptop to cover her belly when reporters confronted her.

Mandy’s complexion was glowing, while the $8 million HKD three-carat pink diamond ring she wore sparkled brilliantly. She also had on a white Audemars Piguet watch valued at $356,000 HKD. It was also reported that Alvin had gifted Mandy with a multi-million dollar home.

According to sources close to Mandy, who has been resting in Singapore, returned to Hong Kong for a business meeting. Asked about Mandy’s pregnancy, her manager said, “We will not respond. Time will prove everything. As her friend, I do not want to comment on her personal matters. I only wish she lives happily.”

Despite juggling two pregnant women in his life, Alvin’s eyes continue to wander. Mainland singer Pan Rouyi (潘柔伊), uploaded a selfie taken with Alvin on her social media account, sparking speculations that the 25-year-old is Alvin’s new love interest. Rouyi has been reportedly attempting to seduce Alvin in the past few months, however Alvin only sees her as a casual fling due to her average looks. When contacted by the media, Rouyi remarked that she and Alvin are only acquaintances.

Women loved Alvin because he is generous with his money. He reportedly gave money to Mango Wong to open her Japanese restaurant and left Michelle Feng with two multi-million homes after their breakup.

Alvin seems to have an open marriage with wife, Heidi Chan, who is an executive at charity Yan Oi Tong. The couple often takes family vacations to exotic locations and continues to appear loving at public events together.

Heidi accepts Alvin’s flirtatious nature, but she is tired of being featured along with his latest escapades in gossip reports. In a 100-word statement in response to Alvin’s love rumors, Heidi wrote, “I do not need to prove anything to anyone. I am his wife.”

She then indirectly admitted that she is aware of Alvin’s numerous love affairs, expressing that seeing men cheat is not uncommon. She wrote, “My husband has looks, money, and education. It’s normal to see many women trying to get close to him. It is not uncommon to see men dallying with others, and in regards to [short-term] lovers, there isn’t only just one. No matter what, there is only one Mrs. Chau. Everything else is typical family matters. The media has exaggerated them.”

Heidi thanked everyone’s concerns and said she will focus on resting to have a healthy pregnancy.

78 comments to Alvin Chau’s Wife Accepts His Cheating: “There is Only One Mrs. Chau”