Chilam Cheung (張智霖) and Anita Yuen (袁詠儀) are role models for many in regards to their stable, yet fun marriage. They’ve been married for 18 years and have been great parents to their son Morton Cheung (張慕童). But Anita’s biggest regret is not having a second child to accompany Morton.

Even though Chilam has collaborated with many beautiful women, very few rumors surround him. It is said that the reason is that Anita is strict and keeps a close eye on Chilam. The actor joked that at this age he still has not settled down, and has lots of potential to fly away and is not necessarily tied down by Anita. He said, “I have to keep you on your toes and not give you too much reassurance so that you can still surprise me!” 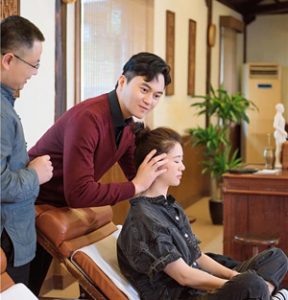 The couple recently appeared on a Mainland variety show and during the interview, Chilam gave Anita a massage showing off their loving relationship. They were asked what their biggest regret in life was, and  Anita admitted that not having another child bothers her. And it is too late now. Chilam joked, “I’ll have it with someone else.” Anita went along with the joke and gave her consent while pointing out the window. Chilam laughed, “I’m going to jump down and find someone else now!” Anita replied with a poker face, “No, this window is too low. Find a higher one and I’ll push you out.”

Asked about their biggest fears, Anita responded that she was most afraid of her son thinking that she is a bad person. Chilam answered that he is most afraid of Anita passing away. “We have too many happy memories together, and my life will never be as perfect again.”

In regards to what they were most proud of, Anita said that she was most proud of being able to meet Chilam. He scoffed, “That’s so fake, tell them a real one!” Anita still persisted and exclaimed that she was being truthful to which Chilam grinned and said, “You have great taste!”