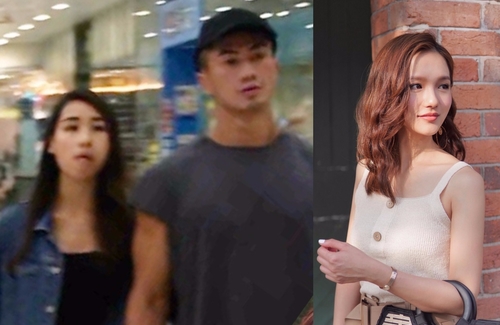 Life on the Line <跳躍生命線> actor Arnold Kwok (郭子豪) is making headlines back to back. Yesterday, the 27-year-old pled guilty to driving under the influence, and today, he was exposed for allegedly cheating on his girlfriend of three years, Karen, with Miss Hong Kong 2018 First Runner Up, Amber Tang (鄧卓殷). After the reports came out, Arnold immediately took to social media to clear his name.

He explained he had already broken up with Karen earlier this year, but didn’t announce it, as Karen is not an entertainer. “And it’s not good news,” he added, “so I did not announce my status. Thank you media friends for the concern, however, I hope we will get some space. A lot of things have happened recently. Thank you.”

He reportedly developed feelings for Amber while they were working together on the variety show, Liza’s Online <娛樂大家>. They also frequently met up at the same fitness center. In an interview, Arnold stressed, “The break up is completely unrelated to Amber. We’re still in the stage of getting to know each other.”

In regards to reports of Amber and Arnold looking at properties together, he explained, “I want to move closer to the company since my license got suspended. That day, a group of people ate together, and then Amber accompanied me to check out apartments together since she had free time. We are not living together.”

Amber had just broken up with her boyfriend of six years last month due to the long distance. At the time she said, “It’s regretful because we’re like family to each other. But we’re at different stages of our lives, so the timing isn’t right.”

She also said she needed time to get over it and hopes her next relationship will not be long distance.

Although Arnold clarified the cheating allegations, Karen suggested he was lying by writing on social media, “Some people always say how much they love you, but the next second they will use excuses to cover up their mistakes and protect themselves.”