Arnold Kwok Pleads Guilty to Driving Under the Influence 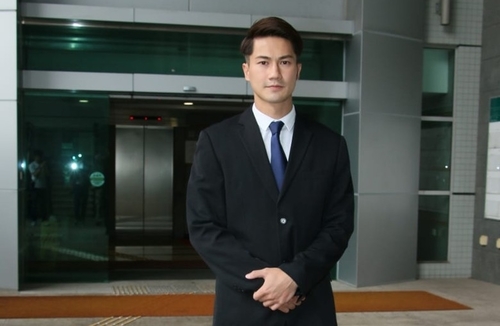 At 8:45 am this morning, TVB artist Arnold Kwok (郭子豪) attended his hearing at the Kowloon City Law Courts regarding his DUI arrest that occurred last March. Although Arnold pled guilty, his lawyer tried to reduce his penalty by painting the actor in a more positive light – stating the artist and part-time fitness coach does a lot of charity work and promotes fitness.

The lawyer said on the day of the incident, Arnold went to eat dinner after work and had white wine during that period. At midnight, the 27-year-old received a call from his father, who was in the Mainland, about his mother feeling unwell. Arnold immediately drove home to see his mother, despite having drunk alcohol.

His lawyer argued, “He understands it is inexcusable, but hopefully the judge will take into consideration that there were no casualties and damages in the incident. He knows he made a mistake and promises not to drink and drive in the future.”

Arnold’s lawyer also presented 16 pages of paper and four letters written by Arnold’s father, TVB’s top management, a veteran artist, and his senior from his alma mater to help his case. In the letter written by Arnold’s father, he stated that his son gave 5,000 yuan of allowance per month. Not only that, but the star also felt remorse and apologized to his family after the incident.

The lawyer added that Arnold has undergone great pressure from the public and lost a lot of job opportunities. The judge adjourned the case, and the verdict will be announced on June 11. However, Arnold had to hand over his license on the spot.

Arnold left the court at noon and bowed to the media with both his hands together. He was released on bail, but could not disclose the bail conditions as the case already entered the judicial process, so it was inconvenient to disclose. He took the chance to publicly apologize to the police officers, medical staff, traffic users, and the media involved in the incident.

As for his upcoming verdict, he said, “I will face it with a positive attitude. If you make a mistake, you will have to accept the punishment. No matter the verdict, I will own up to my mistakes.”

He also expressed, “I will try my best in a humble and positive attitude. I didn’t keep my private life in check before, but I hope through my work, I will allow everyone to see an improved Arnold Kwok.”