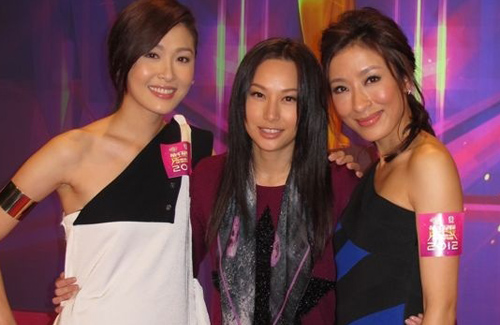 As the most-talked-about awards ceremony in Hong Kong, the TVB Anniversary Awards have already sparked controversy over its list of nominees, which many felt were included for political reasons instead of based on acting skills alone.

Kate Tsui and Tavia Yeung Hug Each Other

Hot contenders for this year’s TV Queen award, Kate Tsui (徐子珊) and Tavia Yeung (楊怡) embraced each other. Both said that they have confidence in the race with a 50 percent chance to win. Tavia will be voting for herself, while Kate will not give herself too much stress over the awards.

Aimee Chan’s (陳茵媺) nomination in the Best Actress category for The Last Steep Ascent <天梯> was blasted by netizens. Moses Chan (陳豪) said that the nomination was put together by TVB and not within Aimee’s control. He did not stress over the criticism directed towards Aimee, accepting that there will be supporters and critics for any entertainment personality.

Since the TV King will be selected by voters, Raymond Lam (林峰) will have a significant advantage due to his large fan base. Wayne Lai (黎耀祥) urged that Kenneth Ma (馬國明) should not be overlooked as well, “Maybe many professionals will be voting for Kenneth.”

Wayne pointed out that each nominated actor had his own distinguishing characteristics and his own confidence in winning is 50 percent.

Although disappointed, Ben will not miss the Anniversary Awards for this reason.    Regarding the nomination list, Ben said, “These things, you have to ask TVB. I don’t know; I only want to do my own part well.” Asked if this will prompt him to consider leaving the company, Ben said that he still has a long-term management contract left.

TVB executive, Virginia Lok (樂易玲), noted that Ben’s acting skills were appreciated by all. Although she had also voted for Ben to be included in the nomination list, it was limited to only 10 artists. She will recommend that more spots be made available in next year’s nominations, and will comfort Ben’s disappointment.

Eliza Sam’s (岑麗香) popularity surged incredibly this year after her winsome performance in Divas in Distress <巴不得媽媽>. Eliza was shocked herself that she is nominated in the Best Supporting Actress, Most Improved Actress, and My Favorite Female Character categories.

Fighting with Christine Kuo (苟芸慧) for the same awards categories, Eliza said, “Please don’t say that! I do have confidence!”

Christine indicated that she hopes to win the Most Improved Actress award.