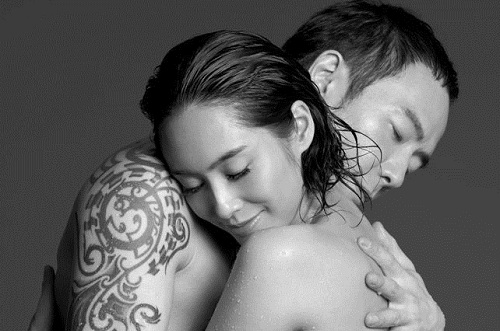 Wearing a puffy coat in February, Athena Chu (朱茵) was rumored to be pregnant when spotted visiting a Chinese herbalist with Beyond member and boyfriend, Paul Wong (黃貫中). Although she had denied pregnancy rumors in her early months, Athena finally admitted that she was more than 3-months pregnant! Athena and Paul will be getting married later this year. Extremely happy with the impending arrival of their baby, Athena and Paul celebrated by taking nude photos together and sharing with the Weibo community!

Romantically rumored with Leon Lai (黎明), Aaron Kwok (郭富城), Stephen Chow (周星馳), and Nicky Wu (吳奇隆) in the 1990s, Athena only admitted to dating Stephen for 3 years. Athena professed that she had even caught Stephen “cheating in bed” with another woman (hearing their intimate exchange outside a hotel room). With her beliefs in love shaken, it was not until 1999 that she started dating her neighbor and fellow dog-lover, Paul Wong. Despite frequent breakup rumors throughout their 13-year relationship, Athena and Paul’s love continued to grow, whereby the pair will finally tie the knot this year as well as becoming parents at the same time!

Returning from Kuala Lumpur, Malaysia at the Hong Kong airport yesterday, Athena and Paul were flocked by reporters. Asked about how she felt in becoming a mother, 40-year-old Athena replied simply, “I’m happy. Thank you everyone!” She asked reporters to direct questions to Paul. Paul revealed that he had learned of Athena’s pregnancy earlier during his birthday; thus the baby news was his best birthday present! The 47-year-old soon-to-be father admitted that the pregnancy was unplanned, whereby he was extremely surprised, yet joyous in anticipating their baby’s arrival. The couple already possessed plans to get married this year; however the unplanned pregnancy may postpone their wedding plans. In addition, Athena’s work load will need to be adjusted accordingly taking into account her pregnant state. Despite Paul’s busy schedule, he will try to stay in Hong Kong to remain by Athena’s side.

After becoming pregnant, Athena and Paul took nude photos to commemorate the occasion. Athena uploaded the nude photo on her Weibo, in which the couple hugged each other with their eyes closed in bliss. Asked why they chose to take nude photos, Paul laughed, “Why not? The results were not bad.”

Since Athena was a devout Catholic, the subject of sex before marriage came up. Paul abruptedly called a stop to the interview and said that if reporters were interested in causing trouble, then they should step aside and talk under the escalator.