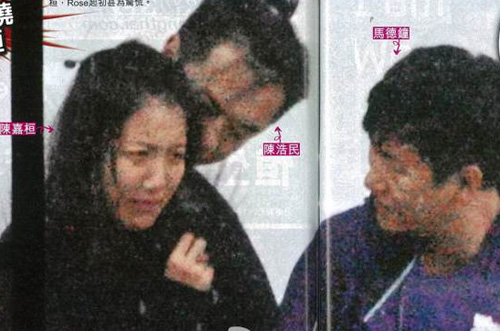 The day before, 19-year-old Rose Chan (陳嘉桓) was filming in Hengdian, China and met with several Hong Kong artists for dinner. Rose was sexually harassed by Benny Chan (陳浩民) and Joe Ma (馬德鐘), who forcibly kissed and hugged her after drinking too much alcohol. Benny roughly covered Rose’s mouth and his hands allegedly reached down to touch her chest and lower body.  Despite Rose’s obvious fear in reaction to Benny’s harassment, Joe Ma sat expressionless while sitting at the same dinner table, as if Benny’s actions were a normal occurrence. Timmy Hung ( 洪天明) was allegedly in a drunken stupor. No one came to Rose’s rescue during the incident. Sunday Magazine published photos of Benny and Joe harassing Rose, which led to shock and anger amongst the public. Since Rose’s harassment incident was extremely serious, her management company summoned Rose’s immediate return to Hong Kong yesterday to meet with lawyers. Rose will be appearing at a press conference today and file a police report. Rose’s manager, Sin Kwok Wai (冼國林), was extremely angered by the incident and vowed to seek justice for Rose. Arriving at the Hong Kong airport last night, Rose appeared tired and did not respond to the media’s questions.

When Oriental Daily initially reported upon Rose Chan being forcibly kissed by Benny Chan and Joe Ma while in a drunken stupor, both Benny and Joe dismissed the gravity of the situation. Benny’s initial reaction when contacted by the press was, “What did I do wrong?” (Rose Chan indicated that you apologized to her after kissing her at the restaurant?) “Why did I have to apologize to her? Last night, we went for supper and the boss and assistant were there too. With everyone present, what could I have done?” (Did you hug and kiss Rose Chan?) “No! Why would I do that? The most I could do was whisper in her ear and put my arm around her shoulder. If she feels uncomfortable with such contact, then I will call her and apologize! I did not possess any intentions to treat her disrespectfully!” (Was Benny drunk at the time?) “I drank a little bit, but I was alert. I even drove my motorcycle home!” (Does your wife know what had occurred?) “No, she does not. I am very concerned what the press will write because my wife is about to give birth to our baby. I’m afraid you will scare her into giving birth early!”

However, after news of Benny and Joe’s harassment leaked, Benny apologized in his blog in a neutral manner, “I ​​was wrong; blame it on my overly friendly manner and treating people with a true heart. We were all filming in Hengdian and many friends were present. Perhaps my method of expression was too exaggerated, which led to others’ displeasure and my family and friend’s concern. I would like to say that I was wrong and finally, I would like to thank my wife’s trust. From now on, I will be cautious and beware of who I meet.”

After Sunday Magazine’s photos of Benny harassing Rose were published, the gravity of the situation worsened. Five hours later, Benny left another message on his Weibo, changing his tune and apologizing. Benny emphasized that he did not harbor any illicit intentions towards Rose, “Today I saw the newspaper reports. Due to my playful nature at that moment, it brought upon problems for many people. Rose was scared and Sin Kwok Lam (Rose’s sifu) was angry. I officially apologize to everyone involved in the incident and hope that the reports will not affect Rose’s work. I regard Rose only as a sister and do not have any illicit intentions. I hope Sin Sifu understands this point; I apologize again and again!”

It was understood that Benny Chan’s wife was currently pregnant. Mrs. Chan did not respond to Benny’s alleged sexual harassment of Rose Chan. In yesterday’s Oriental Daily (prior to the exposure of the photos detailing Benny and Joe’s harassment of Rose Chan), eye-witness Timmy Hung (洪天明) noted that he was too drunk at the time. “In my muddle-headedness, Benny laughed and asked whether Rose wanted to eat sheep penis (羊鞭). Rose was shocked and very scared. Benny bit onto the sheep whip and forced her to eat it, perhaps giving the misconception that he was kissing her!” (Did you see Benny touching Rose’s body inappropriately?) “He was supporting her! From what I know, Benny was only playing!”

Timmy was shocked upon seeing the photos chronicling the sexual harassment incident. Timmy pleaded with Rose’s martial arts sifu, Sin Kwok Lam, who was intent on filing a police report, “I had invited Rose to dinner that evening. I also need to assume responsibility for what had occurred.”

Finally, Timmy put in favorable words for Benny Chan, “From what I know, Benny Chan loves to play and he is too zealous. The girl was too naïve and did not know how to block his overtures, thus leading to what had occurred. I hope the incident does not turn into a big scandal…we are all friends. Who has not done anything wrong?” Prior to the exposure of photos documenting Benny and Joe’s harassment of Rose, Joe told Oriental Daily, “I was sharing a secret with Rose Chan.” (Did you touch and kiss her?) “No, I was just sitting close.” (What secret were you sharing?) “We spoke about forcing Benny to eat sheep penis.”

After photos were exposed detailing the harassment incident, Joe changed his tune, “I did drink some alcohol that night, but my mind was alert. Seeing that Rose was unhappy, I asked how she was and did not act without courtesy.” Asked about Benny’s behavior, Joe drew the line clearly, “I do not wish to speak too much about other things!”

Although Joe appeared full of smiles at a car promotional event yesterday with Ana R. and did not appear as if his spirits were dampened by Rose’s sexual harassment claims, Joe abruptly terminated his blog account last night.

A netizen, by the name of  “Fortunate Coola” could not withstand Joe Ma’s behavior and left a message on Joe’s wife’s blog, “He went too far! He is like a [expletive] beast! Mrs. Ma, you are so beautiful and capable, why don’t you leave him? Do not suffer anymore; it’s pitiful!” Mrs. Ma replied, “Thank you for your concern.” Jayne: I compiled comments from Joe Ma, Benny Chan, and Timmy Hung from the last two days of reports from Oriental Daily in this post, to showcase their inconsistencies BEFORE and AFTER the exposure of the harassment photos. The three men are friends and obviously trying to play down the situation of what had occurred, but they were publicly caught lying. Joe and Benny denied kissing and touching Rose initially and look at the photos and what they were doing to her.

There is almost a “gang rape” mentality going on here between Benny, Joe, and Timmy. If alone by themselves, don’t know if they would have acted so bold in a public restaurant. However, with the three of them together, riding on each other’s jibes and taunts, perhaps they were more emboldened and acted more aggressively towards Rose. I am just glad they were at a restaurant and not at some hotel room playing cards for the night.

My assessment of what had occurred:

1. Joe sharing a joke with Rose that they will force Benny to eat sheep whip and got a friendly hug from Rose as they were both in the joke (Rose was still smiling at that point)

2. When Rose tried to play the trick on Benny, he got up and turned the tables on her. He probably forced her to eat bull whip (strong innuendo) and taunted her further by kissing and groping her.

3. Joe Ma looked on, probably used to Benny’s behavior. When Benny was done, Joe tried to “comfort” Rose and kissed her on the lips?

As for Rose’s emotions throughout the whole ordeal…perhaps initially she was flattered by the men’s attention? They are likely more skilled in such flirtatious behavior and the group had fun initially. When groped by Benny, she appeared in obvious distress. Some readers question why no one came to Rose’s aid? Rose likely sent a lot of mixed signals to the people in restaurant. She was at first hugging Joe willingly, thus appearing as if she were with friends. It looks like they sat there for a long time; the diners were likely confused and didn’t know what to make of the situation, thus someone took photos of the incident and sold it to a tabloid?