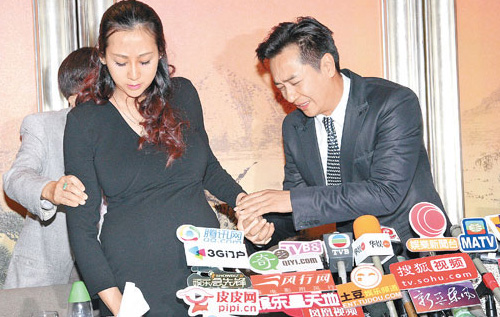 Last week, photos surfaced in which Benny Chan (陳浩民) forcibly kissed and inappropriately touched 19-year-old Rose Chan (陳嘉桓) in Hengdian, China. The ensuing sexual harassment allegations almost bankrupted Benny’s reputation. To save his career and family, Benny and his pregnant wife, Lisa Chiang (蔣麗莎), appeared at a press conference yesterday to express regret over his past actions.   At the conference, Benny cried even more emotionally than the sexual harassment victim, Rose Chan. Benny stood up several times and bowed deeply to apologize. When Benny left the press conference, his gait was weak and he required support from his manager and wife. Perhaps, serious misfortunes never came singly!

At 4 PM, Benny Chan was accompanied by his 10-month pregnant wife, Lisa Chiang, and his manager, Charlie Lam (林查理), at the press conference. Wearing a black suit, Benny appeared distressed. He helped his wife get situated before attempting to regain his good husband image.  After his manager addressed the audience, the downcast Benny took out his notes for the speech. Holding Lisa’s hand, Benny stated his repentance, “Regarding the unpleasant incident which occurred with Rose Chan last week in Hengdian, I sincerely apologize.” Taking a deep breath, Benny said, “I am sorry,” and stood up to make a deep bow. Sitting down, Benny continued, “I admit that I drank too much and my behavior went overboard, which resulted in improper conduct.  I admit that I acted wrongly.” (Benny blinked quickly with tears in his eyes.) “It was not intentional!  I did not intend to hurt Rose Chan. I realize that this incident made her feel terrible and sad. I apologize to Rose, her family, and people who care about her. Due to my unintentional mistake after drinking too much alcohol, I brought many problems and sadness upon Rose and people who care about her. I have to apologize to them!”

Benny once again expressed his regret in getting drunk and acting improperly. He did not forget to apologize to his wife, family, friends and fans. Speaking of his family, Benny burst into tears, “I am really at fault!” Sitting calmly beside Benny, his wife, Lisa’s eyes also welled with tears. She handed him a tissue and patted his shoulder to comfort him.

Crying for half a minute, Benny resumed his speech, “I feel true regret. Despite my age, I still like to play so much. I do not know what I can do to make up for my wrongdoings. It is fortunate that I received my wife’s forgiveness and trust, allowing me a chance to become a responsible father and husband who is willing to change. I promise that I will put in effort to quit drinking. If the doctor feels that I need to undergo alcohol rehabilitation, I absolutely am willing to accept the treatment. I truly would like to end ties with liquor!”

Claiming that he already learned his lesson after reflecting upon his wrongdoings, Benny once again requested Rose to accept his apology, “Once again, I sincerely apologize to Rose Chan; please forgive me.” At this point, Benny stood up to bow again. He said, “Finally, I would like to apologize to two seniors: Rose’s mother and Sin Kwok Lam (冼國林) Sifu. Sorry!” Benny bowed once again.

Benny Chan’s Wife Pleads For Him

After Benny sat down, his wife, Lisa Chiang spoke, “This time, Benny has truly reflected upon his mistakes. I hope that everyone present will give him a chance. He apologized to me and made a commitment to stop drinking and will work hard for our baby and I. Please everyone forgive him! I hope that Rose Chan forgives him as well.  Thank you!”

The press conference concluded at this point. Perhaps Benny was too overexerted emotionally; he leaned over a chair and cried explosively. When he walked away, his legs were weak and he staggered, requiring his manager and wife to escort him. Benny’s thoughts were scattered and he left behind the notes for his speech at the table.

As Benny was exiting, reporters asked him whether Rose Chan drank any liquor on the night of the harassment incident and whether he would refrain from lustful urges outside of his marriage in the future. Benny replied, “I will not respond anymore. Sorry!”

Benny’s manager, Charlie Lam, explained that Benny was very emotional at the press conference since he received his  wife’s support. Charlie hoped that Rose and her martial arts sifu, Sin Kwok Lam, will forgive Benny. As to the possibility that Rose may file a police report in mainland, Charlie said, “We are not worried; Benny’s people relationships (人緣) are quite good. He did not possess the intention to hurt the girl; he had gone overboard in playing after a few drinks. This is not illegal!”

Asked how was Benny’s current relationship with Joe Ma (馬德鐘), Charlie noted, “I will not respond over this issue. I only know that Joe Ma is currently filming in mainland China.” (Is Benny upset that Joe pushed the responsibility of the incident towards Benny?) “No, they have worked together for so long.” Jayne: Benny Chan cried too much at the press conference. His statement was decently written, as he apologized many times throughout the speech and bowed. However, the delivery was a little overboard. Anyhow, with his pregnant wife there and a reminder that if Lisa had forgiven him, everyone’s forgiveness will likely follow sooner or later. A new family deserves a second chance.

48 comments to Crying Emotionally, Benny Chan Apologizes to Rose Chan For Groping Her