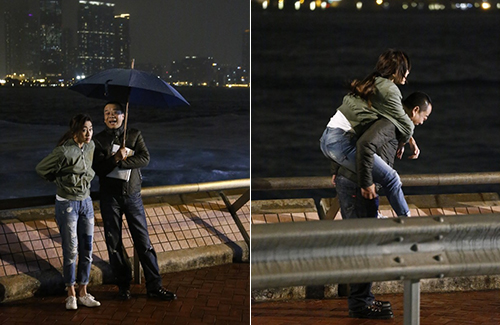 Filming for the TVB supernatural drama House of Spirits <一屋老友記> finally came to an end last month, but shooting for the series was nothing less of a challenge.

In February, main cast members Bobby Au-yeung (歐陽震華) and Nancy Wu (胡定欣) were spotted shooting a romantic scene along the waterfront of Central. The scene being filmed was about Bobby trying to cheer Nancy up, and then confess his love to her. When Nancy reciprocated his feelings, Bobby lifted her into the air and gave her a piggyback ride.

The scene was meant to be cute and heartwarming, but the actors felt nothing but the freezing cold. The chilly night sea breeze and the rainy weather made matters a lot worse. Bobby and Nancy spent all night trying to keep as warm as possible.

The onscreen duo have developed a close relationship over the course of filming. They said they even spent all of Valentine’s Day together. “We had a date,” Nancy joked. “We ate pork lard noodles. A lot.”

Due to filming commitments, both Nancy and Bobby were unable to spend Valentine’s Day with their other halves. “We didn’t get off work until around three or four in the morning that day,” said Nancy.

So did they just go straight to sleep after returning home? “Of course not!” said Bobby. “I had to wake [my wife] up. How could she sleep without me?” he joked.

But it’s the small things that make everything better. Nancy said she did get a Valentine’s Day greeting when she received flowers from boyfriend, Terry Chan (陳明道). Bobby agreed, “These are a must.”