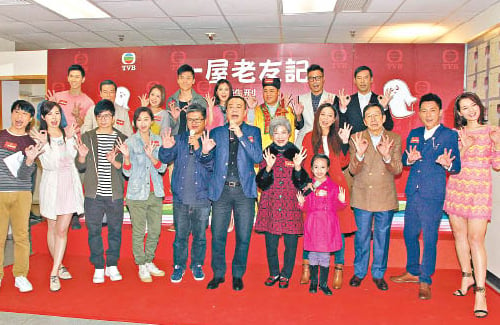 Most TVB dramas this year have struggled to reach 30 points in viewership ratings, but Bobby expressed confidence in House of Spirits, and said he hopes the drama would reach at least 33 points. Bobby said the concept of House of Spirits is quite similar to Don’t Look Now, but the two series are ultimately different.

“Don’t Look Now is just too classic,” said Bobby. “But [House of Spirits] will also be about a house haunted by ghosts. We will not mention the word ‘ghost.’ We call them ‘friends’ instead. This is a comedy, so it won’t be scary.”

In the drama, Bobby will play the boyfriend of Nancy Wu.“I am not yet old and she is all grown up,” said Bobby, who is twenty years older than Nancy. “Now is the perfect time to collaborate.”

On how it’s like to work with Nancy for the first time, Bobby praised his partner, “She completely has the stage charisma of a lead actress. She is a very stable lead now. She’s improved vastly in the last few years, and her performances are solid. No matter what role she plays, her executions are always clear-cut and brilliant.”

Nancy will be portraying a plumber who is very manly and often shows off her muscular body. Nancy said, “I’ve been training a lot at the gym recently, so the producer thought that I should use this opportunity to show off my muscles.”

The 34-year-old is very excited for the opportunity to work with her senior, Bobby. “My colleagues are all very excited for me and said I will have a great time. Although Bobby and I have never collaborated before, we do chat when we come across each other at the company. He’s also very supportive and cheers for me.”

Is Nancy worried that she will commit many outtakes when she’s shooting with Bobby? “Oh, that’s definitely going to happen. I’m very bad at holding back laughter. I’m already laughing when I see his face! Bobby is TVB’s good luck charm. Bobby said he wants the drama to reach 33 points.”