Bootleg Recorded At “The Merger” Premiere, Frankie Lam: “I Will Find Evidence” 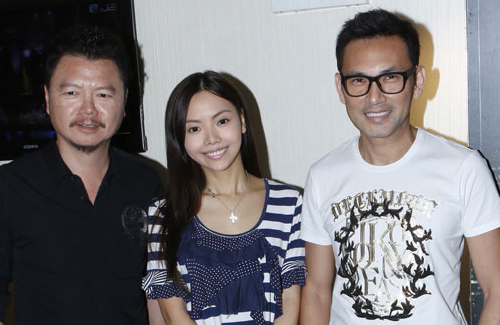 A camrip of the award-winning Hong Kong film The Merger <我們停戰吧！> may be uploaded online ahead of its official release. The news have upset the cast and crew of the film. The Merger is slated for a wide release in Hong Kong cinemas on September 17.

The drama film, which stars Frankie Lam (林文龍), Patrick Tam (譚耀文), and Rachel Lam (林熹瞳), talks about a forbidden love story between a teacher and a student. The film’s screenplay is written by Rachel who, along with Frankie, is also one of the investors of the movie.

While promoting The Merger in Tsim Sha Tsui, Frankie said a friend notified him about the possibility of a bootleg version of the film being released. He said, “Two members of the premiere audience snuck in a camera to film it. I did not witness it with my own eyes and only heard about it through a friend, who saw someone filming it with a mobile phone. I asked him why he didn’t notify me right away, but he said he thought the person filming it was a staff member. Ushers were supposed to be guarding the theater, but I don’t know why they weren’t there at the time.”

Frankie said he will be looking into the case. Asking if he will take legal action, Frankie expressed that he and the staff are currently searching for more evidence. “I don’t want to make this incident any bigger than it already is. Only friends and industry insiders were invited to the premiere, and no one stopped them from filming. I will talk to a lawyer about it. Maybe the person only filmed a few scenes, so I don’t want to make it a big deal.”

Rachel, on the other hand, said, “I am very angry about this. We will release an official statement. This is ridiculous. I’m afraid that this will affect the film’s release in Mainland China.”

Nonetheless, Frankie and Rachel, both investors of movie production company Global Saga, will be busying themselves with another film project. They revealed that they are planning to cast a Mainland actress in the lead role.

“It’s going to be a thriller film,” revealed Frankie. “The script is complete and we already have a list of candidates for the lead role.”