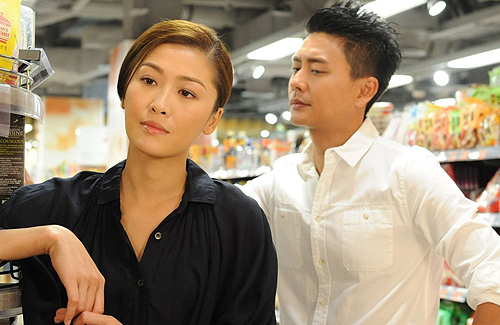 Above: Bosco Wong and Niki Chow star in “A Change of Heart”.

Bosco Wong (黃宗澤) and Niki Chow (周麗淇) are a couple in TVB drama, A Change Of Heart <好心作怪>, and viewers wonder if the onscreen romance could blossom off-screen as well. Bosco and Niki’s individual love lives are empty since the breaking up with Myolie Wu (胡杏兒) and Kevin Cheng (鄭嘉穎) respectively,

Bosco and Niki Are Only Friends

Whenever artists are portrayed as a couple in front of the camera, it is inevitable that there would be romantic rumors surrounding them. Gossip is especially intense when both individuals are single. However, Niki denies that this is the case with Bosco because she already knew gossip would occur from the beginning. Niki pays no attention to the gossip as she is more focused on working with good onscreen partners such as Michael Tse (謝天華) and Bosco.

Niki believes that as long as she stays professional and concentrates on acting, then it does not matter what the tabloids report, “There are bound to be rumors anyway; you can’t stop them from forming! I don’t understand why there are always these speculations, I mean why can’t men and women simply be friends?”

Niki’s performances have always been well received by the audience, but this time her character will be slightly different than what she is used to playing. In A Change Of Heart, Niki has two relationship arcs with Bosco and Michael Miu (苗僑偉). She will share intimate scenes with both of them. For her underwater kiss scene with Bosco, Niki even forewent the need for a double despite not knowing how to swim. Niki admitted, “When I was in the water, my legs were starting to cramp. That’s why I’m thinking about taking lessons in case there are similar scenes in the future!”

Bosco is Not Afraid of Rumors

Bosco hopes the public will be easy on him in the future due to the amount of past gossip he has already received. He does not give much thought about being linked to Niki. Bosco jokingly admitted that since Niki is a bit of a tomboy, no one would believe the rumors anyway.

When asked about the potential awkwardness between him and Myolie, Bosco answered, “Even if I see her in the future, it won’t be awkward. As long as it’s work related, then I think everything will be fine. If anything, it would be the press that would draw up the awkwardness!”

60 comments to Bosco Wong and Niki Chow on Love Rumors