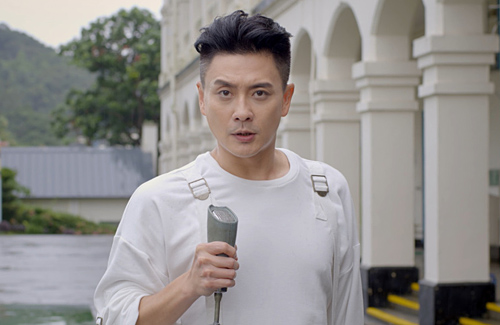 A fruitful filming career in Hong Kong and Mainland China and prospering business ventures, Bosco Wong (黃宗澤) is known for her versatility. Perhaps unknown to many, Bosco once took a stab at the music industry early in his career.

In 2009, he even sang a duet of the classic “King of Karaoke” <K歌之王> with Eason Chan (陳奕迅) live onstage. He became an overnight sensation for this performance, but not because of how great the performance was, but because of how awful he sounded. Bosco became a laughing stock and many teased him for his off-tune singing.

Ten years later, Bosco has decided to stand up where he fell and returned back to ground zero. His newest music video is a parody of the incident, showing off Bosco’s humorous and playful side, but also highlighting his never-give-up attitude. Playing on Eason’s popular song “King of Karaoke”, Bosco’s new song name is “King of Dreaming” <發夢之王>. The music video starts off in a mental institution, where those who chased their dreams were considered to be crazy and suffered from other people’s doubts. Despite this, these dream chasers continue to pursue their dreams in the face of others’ derision.

Although Bosco’s vocals may not qualify him as a standout singer, his perseverance has undoubtedly contributed to all his successes. Not only is he a successful actor, but he is also a savvy businessman. In recent years, Bosco has shifted his acting career to China and ventured into business. Greatly reducing his filming projects lately, the 38-year-old has been primarily focusing on his investments, owning several restaurants and real estate properties. Seeking new challenges, it seems that Bosco’s latest undertaking may be making a return to the music scene.