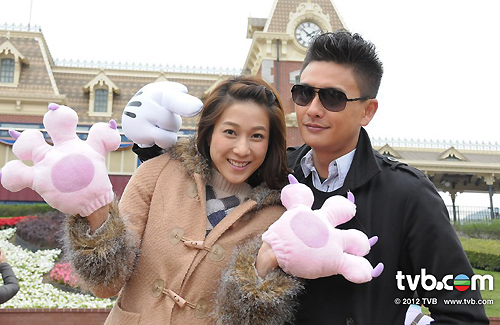 Among the aired TVB dramas of 2012, Witness Insecurity <護花危情> claims first place in viewership ratings so far with its average of 31.65 points. In order to further boost and secure the drama’s popularity, it has been decided that Bosco Wong’s (黃宗澤) character in the drama, Hui Sir, will make a comeback to sing and record a drama version of the theme song, “The Happiest Thing” <最幸福的事> with Linda Chung (鍾嘉欣).

This secret move made by the popular Witness Insecurity couple is a great way to pull more votes for the TVB Anniversary Awards. Hopefully, this special version of the song will be released before then. When questioned about its release, Linda stated that she needs to ask her music company to find out if it will be broadcast in time.

“Linda asked me to help her with the song, because she knows everyone loves Hui Sir and Hailey Kiu. This special version with Hui Sir back alive would be a pleasure for the audience!” Bosco commented.

In terms of the drama’s high viewership ratings, Bosco and Linda said that they do not mind if other dramas such as Silver Spoon, Sterling Shackles <名媛望族>and The Confidant <大太監> surpass it. “The ranking is not important. The most important thing is that the drama is well received by the audience, and the viewership rating is high. It would be best if every drama has good ratings! It doesn’t necessarily have to claim first place.” Bosco said. Linda agreed and added, “So far, Witness Insecurity is in first place, and we are already very proud of this. Even if another drama surpasses us and puts us in second place, I will still be very happy!”

Celebrating Birthday in the Mountains

Earlier on Wednesday, December 12, Bosco Wong spent his 32nd birthday on the filming set of new TVB drama, A Change of Heart <好心作怪>. He filmed a hiking scene in the mountains with Niki Chow (周麗淇). “I can’t believe I spent my birthday up in the isolated mountains. Yesterday was pretty good though, because I celebrated with the cast. They sang the birthday song and gave me Mara cake.”

When asked if he is lonely with his single status, Bosco replied, “I have lots of company.” But not sweet enough? “Cake is already very sweet. It’s enough!”

Is Bosco looking for a new romantic partner? “My birthday wish is to buy a dream house. Right now, I am working hard to earn money. Hopefully, my wish can come true next year.”