Bowie Lam: “I Do Not Get Along With Wong Hei!” 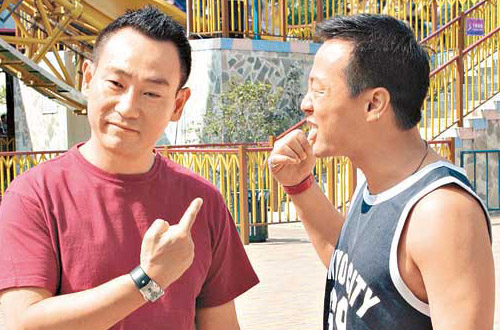 Over the course of his 20-year career, Bowie Lam (林保怡) collaborated with numerous fadans and siu sangs. Although the entertainment circle was rife with negative rumors, Bowie was able to maintain good relationships with both cast and crew. It was not until Bowie worked with Wong Hei (王喜) in 2006 that Bowie broke this tendency to get along well with everyone.

Bowie noted, “My motto in life has always been keeping the peace with other people. However, there will always be people who do not like you. Perhaps we can regard this as a test for how you handle situations and your emotional quotient (EQ) level. In 2006, Wong Hei and I hosted travel program, Homeland Beauty <江山美人> and discovered that we were incompatible in many matters. At the time, we had to film a segment to discuss crayfish. Wong Hei considered the harming of the crayfish to violate [the Buddhist belief which was against] killing animals. OKay! I accept it! I agree–I fully agree, but you can not control the rest of us. After this incident, I knew that I cannot work with him again. Later, I declined to continue hosting Homeland Beauty and finally, TVB asked Ha Yu (夏雨) to host the program.

Some time after the incident, a reporter asked me to take a photo with Ah Hei. I sensed that both of us got over the incident and there was nothing between us anymore. It was only taking a photo and not working together. When I see Ah Hei today, I will say, “Hello.”

No Rumors With Male Colleagues

“I am not here to generate gossip. I want to make the audience pay attention to the role. I just want to live in harmony. When I filmed until dawn with Michael Tao (陶大宇) and Bobby Au Yeung (歐陽震華), we raced our cars with each other. The slowest racer had to treat breakfast.  Lawrence Ng (吳啟華) even gave me a set of golf clubs in the past. I do not have negative rumors when I work with men. “While filming War and Beauty <金枝慾孽> and Dance of Passion <火舞黃沙> and being surrounded by a female cast, I considered myself to be a supporting cast member.  As a supporting actor, I will consider whether my acting will steal the scene from the lead cast? In fact, I take good care of each of my co-stars, such as Maggie Shiu (邵美琪), Sheren Tang (鄧萃雯), Moses Chan (陳豪), and Kenny Wong (黃德斌); we maintain contact with each other after filming. Recently, I asked Maggie Shiu whether I can submit our group photo to be published in a newspaper. She said, ‘Of course, since it’s you asking!”

“I think it’s important to treat people with sincerity. You cannot find friends if you possess fake intentions. While filming War and Beauty one night, the artists went for a midnight snack together while the production crew had to set up the artificial snow for the upcoming scenes. Although I was busy memorizing my dialogue and could not help in setting up the artificial snow for the set, I treated the crew to a midnight snack. Afterwards, Producer Jonathan Chik (戚其義)represented the entire cast and crew in awarding me the ‘Super Attentive Award.’

“Of course, I have tried to treat people sincerely and was hurt as a result. Afterwards, saying ‘Hello’ is sufficient. At least you know who is sincere and who is insincere!”

Jayne: I like both Wong Hei and Bowie Lam. Since Bowie possesses such high EQ, I am somewhat surprised that he truly did not get along with Wong Hei. Perhaps Wong Hei comes across as too passionate about his own beliefs, to the point where he tries to convert people to adopt his ideas, which may come across as offensive and invasive.