Mainland Chinese drama Legend of the Phoenix <鳳弈> will be succeeding the 8:30 p.m. time slot currently occupied by the TVB anniversary drama Finding Her Voice <牛下女高音>.

Produced by Tencent’s Penguin Pictures, Legend of the Phoenix stars Viva He (何泓姍) as Ye Ningzhi, a commoner who by chance ends up as a palace maid after performing for the royal court. She befriends the empress consort (Cao Xiwen 曹曦文) and forms a relationship with the strategist Wei Guang (Jeremy Tsui 徐正溪) as she works her way through the harem. Wayne Lai (黎耀祥) stars as Kun Lang, a former court physician turned eunuch who is two-faced, calculative, and manipulative.

Despite being a three-time Best Actor winner, Wayne is only a second lead in Legend of the Phoenix. Wayne, however, doesn’t find his new position as supporting to be any less important. “Many things can be brought into play with this character,” he said. “In the past, there has been many actors who made it big in supporting roles. In acting, you shouldn’t care about screentime.”

Wayne has declined many offers to star in Chinese dramas in the past, but he dropped all jobs to accept Legend of the Phoenix, and it’s not hard to understand why—it’s for Cheung Wah-biu (張華標). 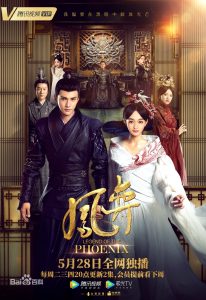 Known as Hong Kong’s “golden scriptwriter,” Cheung was the force behind the Rosy Business <巾幗梟雄> franchise, the very series that had put Wayne on the map. When Cheung called up Wayne to take part in his first Chinese drama, Wayne immediately accepted it. “As long time friends, I had to say yes. Of course, the pay wasn’t bad either!”

Legend of the Phoenix also stars Cao Xiwen, best known for her performance as Noble Consort Wan in Ruyi’s Royal Love in the Palace <如懿傳>. Playing Zheng Shujun, the Empress of Liang, Zheng holds a lot of power within the court. In order to protect Ye from the wrath of the princess, Zheng grants Ye the title of consort. Cao had described her character as someone who is very strong-willed and powerful, but soft and compassionate inside. “It’s a very contradicting character,” she said.

Playing the Princess of Liang, Liu Min (劉敏) is manipulative and vies for power. She has been systematically removing her brother from power over the years in order to sit in the throne herself.

As for Luo Qiuyun (羅秋韻), who plays the palace maid turned consort Ling’er, is one of the show’s main villain. Grateful for being cast in such a colorful role as a newcomer, Luo extremely enjoyed her time playing the villainous Ling’er.

Legend of the Phoenix premieres in Hong Kong on November 18, 2019.