Cai Xukun Talks About His Struggles

Singer Cai Xukun (蔡徐坤), who kickstarted his career after winning first place in the Chinese survival show Idol Producer <偶像練習生> in 2018, has returned for Idol Producer’s third season, Youth With You <青春有你2>, as a host and youth representative. Coming full circle, he reminisced his trainee days while sharing his experiences and struggles with the eliminated and remaining candidates.

The young star shared that he first received training while participating in the reality talent show Super Idol <星動亞洲>. Although he was selected to debut in boy group SWIN, mismanagement from Yihai Entertainment Company and a lack of opportunities eventually led to a downfall in SWIN’s popularity and public recognition. This eventually resulted in a contract termination that shattered Xukun’s artiste dream and subsequently caused him to fall back on zero. 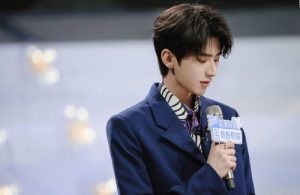 Despite such an unpleasant experience, Xukun did not give up and strove to pursue his dream through Idol Producer. Showing great resilience, Xukun sought to achieve and display the best version of himself to the audience. Xu Kun persisted on performing even when he ran into technology problems on stage, such as when his microphone made no sounds, and when he suffered severe skin peeling from allergies during the filming of Idol Producer’s theme song “Ei Ei.”

Always determined to deliver a perfect performance, he said, “No matter how many people there are in the audience, and no matter what sudden complications you may face, you should never stop your performance. You have to complete your performance because there are people who are still watching you from below the stage.”

Xukun encouraged the trainees to cherish every stage opportunity and emphasized that they should never lose their unique identity. This evoked androgynous trainee Liu Yuxin (劉雨昕) to question if it is necessary to change or adjust themselves when their style faces criticisms. Xukun answered, “All kinds of opinions will form when your style is different from others, but there will be people who will like you for who you are.”