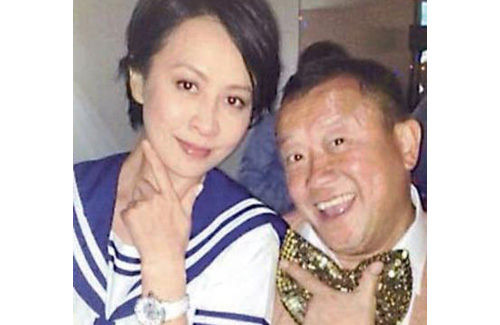 Eric Tsang (曾志伟) held his 59-year-old birthday party on Saturay, April 14th.  The birthday theme was “Return to School Days,” in which the guests donned school uniforms to please the birthday man. Despite the “minors” on site, alcohol was prevalent and Eric Tsang got routinely drunk!

Since Eric will be turning 60 years old next year, the nostalgic theme of Eric’s birthday party served as a reminder to have fun and maintain a young heart at any age. Wearing a school girl outfit, Carina Lau posted a photo of Eric and herself on her Weibo blog. Carina wished Eric a “Happy Birthday,” while laughing that everyone had fun recollecting the bygone days of their school years.

Newlyweds, Timmy Hung and Janet Chow, had just returned to Hong Kong from their honeymoon. Asked whether they had attempted to conceive during their time away, Timmy joked that he will not speak about “adult topics” at a school party.

Jackie Chan and Alan Tam did not wear “school boy outfits” since they were already advanced to being “principals.”  Asked what present he will give Eric, Alan laughed and said, “I will give him a set of ‘bananas’ [indicating an empty hand].”

Eric’s birthday party concluded at 1:45 AM, upon which many guests had too many drinks. Jackie and Alan appeared with red flushes, while Eric got drunk at his own party. Although often drinking to a stupor in the past, Edmond Leung was spotted with a bottle of soda and appeared to be still sober. Jayne: Eric’s birthday bashes are always star-studded and fun. The school theme is fun too…cherishing our youth and young heart is important at all ages. Does old age necessarily mean pessimism and a hardened-heart?

Michael Tse rocked his “school boy” outfit! Maybe Laughing Gor can go undercover and infiltrate student gangs next…. Eric can be the jovial principal, if he manages to dethrone Alan Tam. 🙂