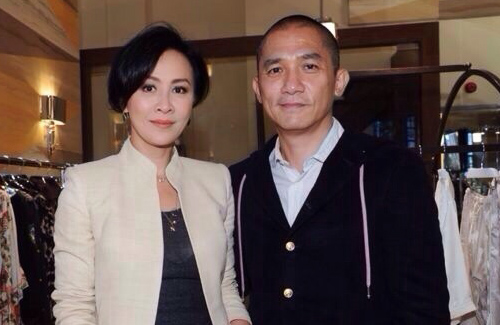 In her interview on TVB’s Telling Maria 2 <最佳女主角> last week, Carina Lau (劉嘉玲) candidly chatted about her traumatic abduction experience that occurred in April 1990. After turning down the offer to star in Set Me Free <我要逃亡>, a movie that the triads were involved in, Carina was kidnapped for several hours by four triad members and was photographed naked. Her nude photos were leaked and published on the cover of a now-defunct magazine in 2002.

In an earlier interview, Carina’s husband Tony Leung Chiu Wai (梁朝偉) mentioned that he was afraid Carina would contemplate suicide. At the grand opening ceremony of her new home décor store with Sir David Tang (鄧永鏘) yesterday, Carina admitted that she had thought about ending her life.

“I’ve thought about it, but I didn’t know how, so I just thought about disappearing. I was young then and I went through it two times. I am thankful for [the abduction] because it made me a much stronger person. Through this incident, I hope I would be able to let others know that everything is possible to overcome.”

Asked if she felt uncomfortable having to speak about the incident again, Carina laughed, “I got over it, it’s just that [the media] hasn’t!”

Tony Leung and Carina’s good friend, Kate Moss, was also at the store’s grand opening event. Investing over $10 million HKD on the business, Carina said she believes in David’s dream and is looking forward to see the store open in England and mainland China. There are also plans for the store to be a listed company.

After her divorce with husband of eight years Li Yapeng (李亚鹏), there were rumors claiming that Faye Wong (王菲) plans to stay permanently in Hong Kong. Carina clarified she and Faye had invested on a lot of property in Hong Kong together even before Faye’s divorce.

Asked if Faye is determined to stay in Hong Kong, Carina said, “Faye always comes to Hong Kong anyways to shop. Hong Kong is a shopper’s paradise.” Carina did, however, said that if Faye invites her to her housewarming party, she will gift Faye with a customized overcoat.

30 comments to Carina Lau Thought About Suicide After Triad Abduction