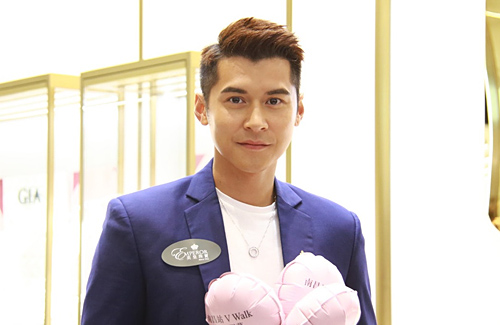 Carlos shared how his lack of dancing and singing talents led his company to drop their plans for him to form a band with Kenny Kwan years ago.

Attending a jewelry publicity event in Sham Sui Po, Carlos Chan (陳家樂) picked out jewelry for his sister, who is getting married in October. Carlos shared, “Today my sister and dad are both here, because she is having her wedding banquet in October. Dad has been reminding me to get something for her, but I have not done it until recently I realized there’s only two months [to the wedding].” Carlos invited his sister to pick out her own dragon and phoenix bangles, and he would pay for them with a personal budget of $60,000 HKD.

When asked about his Emperor Entertainment Group (EEG) label mate Kenny Kwan (關智斌) who will hold his own solo concert at the Hong Kong Coliseum after his BOYZ partner Steven Cheung’s (張致恆) cheating scandal, Carlos shared his happiness for Kenny. “Really happy to see that he can fulfill his own dream. I’m elated for him. When we first entered the industry, he was my senior and gave me lots of feedback. I wish him a successful show.”

When asked if he would be singing and dancing onstage as a guest performer, Carlos responded with a laugh, “I’m not good at singing and dancing, so I won’t make a fool of myself onstage. I recall  when BOYZ had disbanded and Kenny went solo, the company had plans to form a musical duo called Sun Boy’z, so they approached me (as one of the potential candidates). But after a few dancing sessions, I realized I was really not cut out for it. The company gave up on me.”

5 comments to Carlos Chan: I have Zero Dancing & Singing Talent