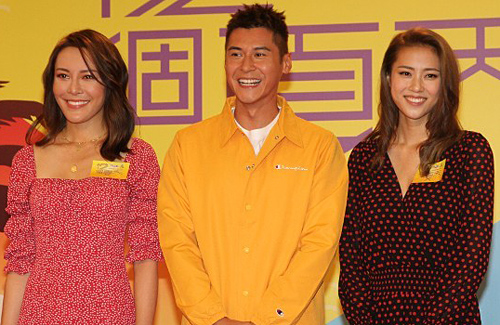 During the event, Carlos appeared shy when he was asked to take a photo with Kelly and Tiffany. Standing in the middle between the two beautiful actresses, Carlos caused much laughter with his reddened face and stiff posture. Teased by reporters about his reddened face, Carlos embarrassingly denied, “It’s because we haven’t collaborated before, so that’s why there’s some awkwardness. I’m also slow to get comfortable with people. I was even initially worried about going to film in South Korea with Shiga. Luckily, we’re close in age and share the same understanding in topics, so there’s no generation gap.”

“We went out to the sea one time. After five minutes, Shiga was already experiencing sea sickness and began throwing up. I also vomit very easily. When I saw her vomiting, I did the same as well. She said it’s a butterfly effect. We later went to end of the ship to vomit, and soon even saw blood in it. The producer said he would cut this scene. Afterward, we went snorkeling but the waves were huge and heavy so we vomited again,” Carlos revealed.

Despite all the vomiting, Carlos described the overall focus of the trip on eating. They ate overnight snacks and even abalones that he is already missing after returning to Hong Kong.