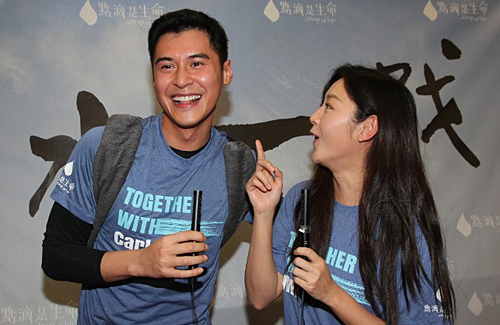 Carlos Chan (陳家樂) and Michelle Wai (衛詩雅) attended a charity marathon event to support “A Drop of Life” foundation. Carlos’ rumored girlfriend, Jeannie Chan (陳瀅), who wasn’t supposed to attend due to a scheduling conflict, was able to come after all. Uncomfortable with the rumors, Carlos eventually refused to take a photo with Jeannie alone.

When Carlos was notified that Jeannie was coming to the event, he was very surprised by the sudden appearance. He responded, “Really? She is coming? I asked her a few days ago and she said she wasn’t, but her friends were.” 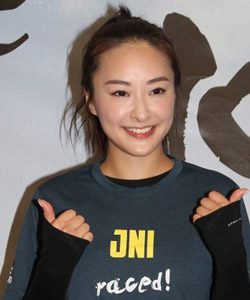 Laughing at Carlos’ response, Michelle said, “I’ve never had rumors or negative news since entering the industry, so I never had to respond to them. I really just wanted to see how you respond so quickly! Wow, your face is turning really red!”

Carlos and Michelle’s interview suddenly turned into humorous banter. Carlos immediately responded that the rumors were not true. He said, “I didn’t even know she was running! We are just regular friends! When we meet up, we are usually with friends or coworkers.”

When Jeannie arrived at the event, reporters told her about Carlos’ turning red at the mention of her name. She laughed and said, “Are you sure it’s not from running? Honestly, I was supposed to be at another event, but it got cancelled so I was able to attend this event. You will notice I don’t even have the right shirt, but if there is time, we can run together.”