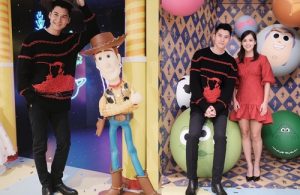 Carlos Chan (陳家樂) attended a Christmas promotional event at East Point City shopping mall with Miss Hong Kong 2020 Lisa Tse (謝嘉怡). At the Toy Story-themed event, Carlos touted himself as the King of Games and expressed that stuffed toys would be a very suitable Christmas gift for a significant other.

With only four coins, Carlos was able to win a stuffed animal from the claw machine. He smiled and said, “I was very lucky. I was scared that losing would ruin my title of King of Games. I might not be the best at games, but I take them very seriously.” 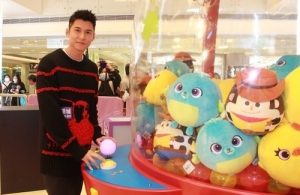 When asked if there were any worthy competitors at his company, he said, “I wanted to say Kenny Kwan (關智斌), but he has to carry the burden of being an idol, so he cares more about his appearance than playing.”

Although Christmas is right around the corner, Carlos shared that he might have to spend it at work. He said, “I accepted a TV drama that will span from Christmas to New Year and the Lunar New Year. I hope that I can eat a meal with my family and play some video games if I have off.”

The reporters then brought up that this would be the first year that Carlos would be spending Christmas with his rumored girlfriend, Shiga Lin (連詩雅). When asked if he planned any quality time alone with her, he shyly said, “Playing a soccer game together.” It turns out Shiga enjoys gaming too, and Carlos even complimented her for being a great gamer.

When reporters dug for more details about Carlos’ relationship status, he laughed and begged for mercy. As for what Christmas gift he would buy for his girlfriend, he immediately responded that he would purchase the stuffed toys from this event as gifts. He said, “I will buy everyone gifts, and everyone will be getting the same thing. These dolls are really great.”

The reporters then joked that if she has a stuffed toy to cuddle with, she wouldn’t have time to hug him. He joked that the stuffed toys are definitely more comfortable to hug than his boney body.

Dodging all the questions regarding him and Shiga, the reporters decided to ask him about his ex-girlfriend Jennifer Yu‘s (余香凝) upcoming wedding on Saturday instead. He generously expressed, “Congratulations to her. I sincerely hope that she can find someone that will be with her until the end.”