Cast of “Three Kingdoms RPG” Reveal Their Own Preferred Endings 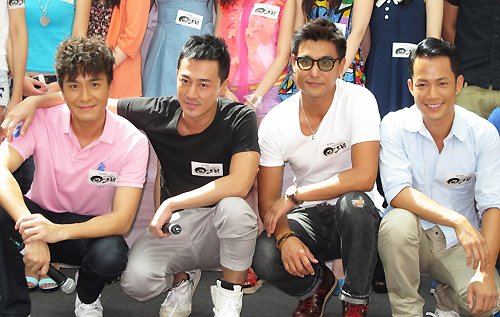 Although TVB drama, Three Kingdoms RPG <回到三國>, generated much criticism for its poor casting, lackluster visual effects, and weak script, the time traveling drama garnered high ratings, and is currently on the run for highest-rated drama series of the year against the popular crime thriller, Witness Insecurity <護花危情>.

The two-hour episode finale of Three Kingdoms RPG will air on Friday, August 10th. What will happen to Vincent (Kenneth Ma)? Will he be able to return to the future, and bring his love interest, Song Yau (Tavia Yeung), with him? Will Vincent and Zhuge Liang’s (Raymond Lam) mentor-and-friend relationship be broken? With only two days left until the finale, the cast of Three Kingdoms RPG spill their own version of the ending, letting the audience decide for themselves!

Raymond Lam 林峯 (Zhuge Liang): “Vincent originally wanted to bring Song Yau with him to the future, but he accidentally brings Zhuge Liang with him instead. Vincent will use this chance to open up a school, and have the wise and intelligent Zhuge Liang be the school’s main teacher, while Vincent himself will be the headmaster of the school. As for Song Yau, she will guard the place where the time traveling tunnel is, waiting for Vincent to return to her one day, but he never goes back.”

Kenneth Ma 馬國明 (Vincent Szema / Szema Wan Shun): “I will bring all the ‘There Kingdoms’ characters with me to the future, and have Liu Bei be the Chief Executive and Guan Yu be the Commissioner of Police. Most importantly, I will marry Song Yau, and the final episode will have many of our intimate kissing scenes! That will be a happy ending.”

Ruco Chan 陳展鵬 (Zhou Yu): “Not only does Zhou Yu not die, he will also start a ‘relationship’ with Vincent. The two of them will go from being just friends to life-long soul mates.”

Tavia Yeung 楊怡 (Song Yau): “I follow Vincent to the future and will use my traditional feminine views to remind the Hong Kong women of today about some of the merits from the ‘three obediences and four virtues.’ I will also glorify Chinese culture! On the other hand, since I will now be in modern times, I can finally try casual dating! I might not choose Vincent in the end, since he needs to spend so much effort to court me anyways!”

Joseph Lee 李國麟 (Liu Bei): “All of our ‘Three Kingdoms’ characters travel to the future and horse around, messing up society’s orders. This will leave room for a sequel!”

Sharon Chan 陳敏之 (Xiao Qiao): “Vincent is too naughty! He needs to be punished! Have him stay in the Three Kingdoms period! All of the ‘Three Kingdoms’ characters were having too much laughing at Vincent’s terrible gags. Vincent and Song Yau will also be able to get married in the end.”

Ram Chiang  蔣志光 (Sun Yuk): “Vincent brings Song Yau to Mars, and the two of them will open a karaoke bar where they will sing Always On My Mind everyday for the aliens to enjoy!”

Kaki Leung 梁嘉琪 (Huang Yueying): “My character is a very smart, educated, elegant, and has good manners, so I’m sure guys in modern times will really like me. I will follow Vincent to the future and have the guys know that besides outer beauty, inner beauty is also very important.”

Johnathan Cheung  張穎康 (Fan Gen): “Vincent will bring me to the future so I can continue to serve him. I will also continue to be him and Song Yau’s ‘light bulb,’ and will be able to witness Vincent and Song Yau’s marriage in the end!”

Jim Tang 鄧永健 (Lu Su): “Song Yau goes to the future and is a girl out of time. She will have to start all over again as a modern person.”

Rachel Kan 簡慕華 (Lady Gan): “Vincent successfully brings Song Yau to the future and she will have to learn how to be a modern person. The ending is a happy one, and it will leave room for a sequel!”

Vin Choi 蔡淇俊 (Liu Cong): “Vincent returns to the future and goes to college to study science, and succeeds in discovering another time traveling tunnel so he can travel back to the past whenever he pleases. It’s similar to Doraemon – he can go back in time whenever he wants to see Song Yau.”

Yeung Ching Wah  楊證樺 (Ma Qiu): “For the ending of Three Kingdoms RPG, I hope Vincent and Song Yau will encounter a storm again, and all of the ‘Three Kingdoms’ characters will be warped into the storm and travel to the world’s happiest country, Vanuatu, where they all live happily ever after.”