Cecilia Cheung a No Show at Son’s Birthday Party? 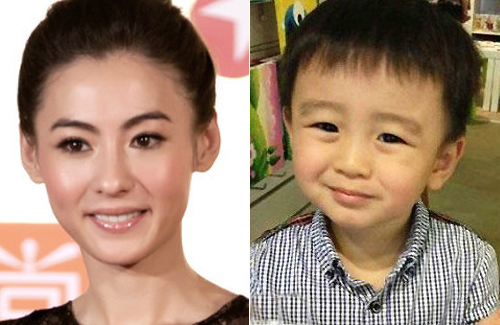 Aside from Mother’s Day, May 12 is also the day of Quintus Tse’s (謝振南) third birthday. The younger son of divorced couple Nicholas Tse (謝霆鋒) and Cecilia Cheung (張栢芝), Quintus has one older brother, Lucas Tse (謝振軒), who will turn six years old in August.

The paparazzi followed a van en route to the Pacific Place towers in Admiralty, Hong Kong, from Nicholas Tse’s home today. The van stopped at the entrance around 12 p.m.; two large boxes of inflated balloons and party favors were unloaded. Around 2 p.m., Nicholas’ mother Deborah Lee (狄波拉) and her husband, Kong Yiu Sing (江耀城), arrived via taxi. They did not respond to the reporters’ inquiries and quickly entered the building. The couple wore matching yellow and white attire.

A few minutes later, Nicholas’s two sons Lucas and Quintus, both very well-dressed, arrived in the arms of two security guards. Quintus ran to his grandmother, Deborah, and gave her a rose. Nicholas’ father and Deborah’s ex-husband, Patrick Tse (謝賢), arrived moments later. Upon seeing the paparazzi, he exited the taxi and exclaimed, “You guys are smart! Here too?” Asked if he was there to celebrate his grandson’s birthday, he said, “You guys know that too? I suppose so!”

Would his family be celebrating Mother’s Day too? “Sure!” Any gifts for Deborah? “No need to buy any. There are a lot [of presents] upstairs!” His daughter Jennifer Tse (謝婷婷) came separately minutes later.

Oriental Daily reported that the party was hosted by Nicholas, who prepared homemade cake himself for dessert. Patrick confirmed this in a phone interview last night, but added that they ordered take-out for the main course. “I had a lot of fun with my grandsons! I haven’t seen them in two to three weeks!”

Was Cecilia also present at the party? “Of course not!” exclaimed Patrick.

Lucas and Quintus left the part at around 7:30 p.m., and they were driven to Cecilia’s home in Magazine Gap Road. It was reported that Cecilia did not attend the Mother’s Day/birthday party celebration with her former in-laws, and waited for her sons to return home for a much more modest Mother’s Day celebration.

21 comments to Cecilia Cheung a No Show at Son’s Birthday Party?