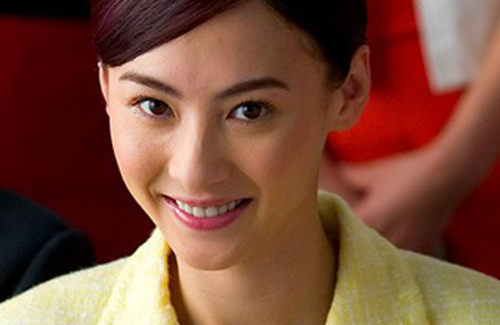 Cecilia Cheung (張栢芝) was on the bitter end of the breakup when it was revealed that her ex-husband, Nicholas Tse (謝霆鋒), rekindled his old romance with Faye Wong (王菲). It was reported that Cecilia was angry, frustrated, and even cried when news broke that Nicholas and Faye were dating again. On September 25, Cecilia released the music video of her latest single “It’s Finally Time” <該是時候>. It was rumored that the lyrics, which are helmed by Cecilia herself, talks about her feelings towards Nicholas and Faye.

In an interview clip for the reality show She’s My Family <明星到我家>, Cecilia revealed her thoughts about love and recalled her past with Nicholas—from dating, to marriage, and to divorce. “That road [I walked on] was, honestly, very difficult. But if all of us walked on flat paths instead, that will also not be a good thing. There will be times when we feel tall and low; right or wrong. Actually, if we learn from our mistakes, we can gain even more [wisdom]. I’ve done many good things in my life. I’ve also committed many mistakes, but I have learned from them.”

In She’s My Family, Cecilia was arranged to live with a family of farmers in rural China. During her stay, she helped the family plow the fields, pick corn, feed pigs. Cecilia grew attached to the humble lifestyle, and said she already feels reluctant to leave. “I was very emotional. I didn’t expect myself to feel like this before I came. When this program ends, I’ll miss it very much.”

Cecilia Loves Being a Mother

Tears brimmed on Cecilia’s eyes when she was asked about her thoughts on love. “When love comes, you really can’t stop it. When I love, I don’t love just my boyfriend. It’s not that simple. I love everyone. I even love my pets. Once I love, I will give it my all. Love cannot be calculated or measured. If you do, that’s not true love.”

Cecilia is busy with her career in mainland China, but nothing is more important than taking care of her two sons, 7-year-old Lucas and 4-year-old Quintus. She revealed that Lucas is already at the point of his childhood where he feels embarrassed when his mother takes him to school.

“It stings, but I would tell myself that there is no other way. I used to think that way when I was younger too.”

Cecilia realizes that once her two sons come of age, she will have to learn to let them go. “I want them to learn how to pick themselves up after they fall. Otherwise, they will never learn how to protect themselves.”

But Cecilia admitted that she does not want those days to come soon. “A good plan is to keep on having kids so I can continue to be a mother!”