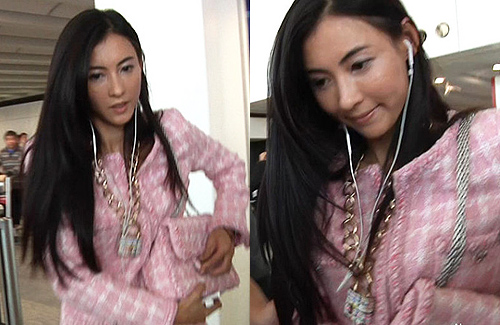 Despite their divorce in 2011, Cecilia never forgot about Nicholas and has always tried to rekindle their marriage. With the re-appearance of Faye in Nicholas’s life, Cecilia lost all her chances. Cecilia’s physical health took a toll – she was hospitalized for acute gastroenteritis and has dropped down to only 90 pounds.

During this time, Cecilia was busy filming reality program, She’s My Family <明星到我家>, where visited the farmlands of Yunnan. Due to the combination of having to travel and the sudden news of Nicholas and Faye’s reconciliation, Cecilia fell very ill. Luckily, the production crew of She’s My Family was very considerate and did not demand Cecilia to immediately return to work despite a tight schedule.

Buries Herself in Tears and Alcohol

According to an inside source, Cecilia’s mental health also deteriorated and shewas reduced to tears at home every night. Since Cecilia did not want her sons to be affected by her crying, she flew to Japan alone to take a mental break. However, Cecilia continued to cry in her hotel room when she arrived in Japan and often called her siblings and friends to sob about Nicholas’ irresponsible parenting.

To release her anger and sadness, Cecilia frequently purchased expensive items on her shopping trips. She also appears to have turned to alcohol to make the difficult days pass quicker.

Nicholas reportedly gets along very well with Faye’s eldest daughter from her first marriage, Dou Jingtong (竇靖童). Growing up with a talented mother, Jingtong also developed a passion for singing.  Promising to help Faye’s daughter with song writing, Nicholas seemed to have forgotten about his own two sons in Singapore and has not visited them for months.