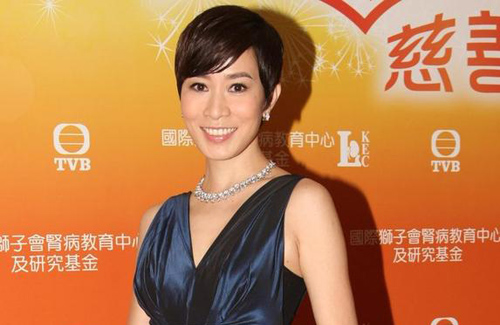 Charmaine Sheh (佘詩曼), Susan Tse (謝雪心) and May Chan (陳嘉佳) participated in a charity performance to raise funds for patients who suffer from kidney failure. At the event, Charmaine spoke about the filming of the movie adaptation of Return of the Cuckoo <十月初五的月光>, in which she is reunited with co-star Chilam Cheung (張智霖).

The behind-the-scenes footage of the film version of Return of the Cuckoo was released recently to overwhelming popularity. To-date, more than 34 million people have viewed the clip online. Charmaine said, “We still have a month left before filming ends. Before we started filming, I actually went to re-watch the television series so that I can immerse myself in the story again. I am confident that my current acting skills are much better than my acting skills before.”

The emcee for the evening, Charmaine looked stunning in a sapphire-blue dress with a flattering neckline. Hoping for a large number of donations, Charmaine said, “I’ve participated in these programs over the years, and never fail to donate each year. Outside of work, I hope to be able to give back to society in meaningful ways.”

Also at the charity performance, Susan Tse and May Chan dressed up in vintage outfits and put up a skit together. Susan also spoke about the favorable response she received from netizens for her swimwear scene in Eye of the Sky <天眼>. She expressed, “Of course I’m delighted! But I’m not ready to go onscreen in a bikini yet…I’ll save that for the next series!”