Charmaine Sheh Finds It Hard to Work with Dayo Wong: “He’s Too Funny” 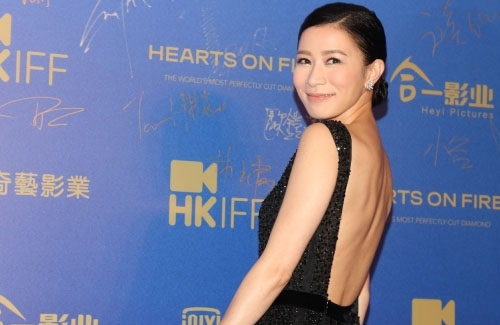 Charmaine, who no longer carries a TVB contract, is currently working with Dayo Wong (黃子華) in their new film Agent Mr. Chan <棟篤特工>. The spy comedy, written by Dayo and directed by Cheung Ka-kit (張家傑), stars Dayo as a spy from England and Charmaine as a high-level Hong Kong government official. The two are forced to work together, despite having their differences. Agent Mr. Chan is Dayo and Charmaine’s second collaboration since TVB’s You’re Hired <絕代商驕> in 2009.

“We’re still filming it,” said Charmaine, when asked if she and Dayo were done with the movie. She added that working with Dayo is very difficult because it’s hard to hold in her laughter when he makes jokes.

The 41-year-old actress plans to take a break after filming obligations for Agent. Mr. Chan are completed. She wants to go on vacation with her family. She shared, “My mother has been wanting to go on vacation for a while, but because she doesn’t like long distance flights, I plan to take her somewhere closer. Maybe the Maldives.”

Mentioning to Charmaine that paparazzi have photos of her meeting up with “strong man”, Charmaine said with a laugh, “Are you talking about Dayo? I’ve been meeting up with him a lot. He’s very strong too.” (No real boyfriend yet?) “Let it happen naturally.”

Shawn Yue On Best Actor Loss: “There Are Plenty of Opportunities” Shawn Yue, who was nominated for Best Actor at the Hong Kong Film Awards for his performance in Mad World <一念無明>, lost the Film King award to Trivisa’s <樹大招風> Gordon Lam (林家棟). Shawn is not sad about the loss at all, adding that he was the youngest of the nominees and that he’ll have plenty of opportunities in the future.

“I honestly think that box office and good word of mouth is good enough,” said Shawn. “Hopefully my future films can achieve the same success.”

In his fourth year as ambassador for the film festival, Louis said he strongly supports the cultivation of new talents in the industry. “As an employee of the Hong Kong film industry I should offer my full support to newcomers. It’s still a great industry to flex your creativity.”

Louis shared that he once acted in a film without pay. He stressed that actors should treat the film’s quality as the most important thing to consider, rather than its marketability.