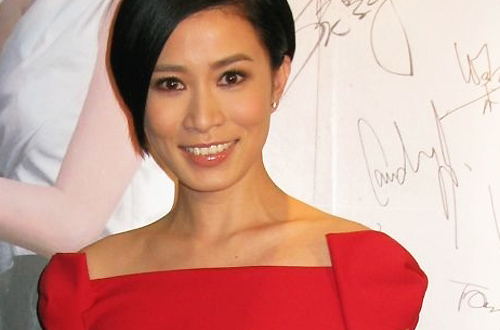 Several of Charmaine Sheh’s (佘詩曼) good friends, such as Toby Leung (梁靖琪), Sherming Yu (姚樂怡), and Annie Man (文頌嫻) have already been married.  With another of Charmaine’s good friend, Angela Tong (湯盈盈) tying the knot with Chin Ka Lok (錢嘉樂) at the end of the year, does Charmaine feel the pressure to find her life partner?

Chin Ka Lok and Angela Tong have confirmed plans to get married this year.  It was speculated that Angela was also pregnant, leading to their rush to get married by the end of the year.  Both parties have hinted this, but have yet to confirm, as the alleged pregnancy had not passed the first trimester.

Charmaine Does Not Have Any Suitors

Attending a promotional event for watch company Longines, Charmaine was asked about Angela’s “double happiness” of marrying Chin Ka Lok and becoming pregnant at the same time.  Charmaine replied that she had already congratulated her.  She did not find out about Angela’s wedding plans until news reporters asked her about it. Regarding Angela’s pregnancy, Charmaine avoided answering directly and said, “I wish that she would have a snake baby soon!”

Reporters continued to ask when would it be Charmaine’s turn to get married and have children?  Charmaine responded, “It will be later!  You can all wish me the best, but it’s all about fate. Currently, I do not have a target, suitors, nor wealthy pursuers.  Honestly, wealth is not that important.  The most important aspect is communication.  I hope to find the kind of love that would make me smile upon seeing him!”

With all of Charmaine’s good friends married, was she pressured to get married?  She stated no and explained that she would take her time to find “Mr. Right” as it is a lifetime commitment.  In addition, she had not been pressured by her mother because both her brothers had provided her mom with grandchildren.

Reporters then persisted and asked whether or not she had looked into a matchmaking service?  Charmaine exclaimed, “No!  I’m not at the stage where I need to contemplate it!”  However, she would not eliminate the possibility of a lightning marriage such as Gigi Leung (梁詠琪) if she were to find her life partner.  Although she had never dated a foreigner, Charmaine insisted that nationality and age are not priorities.  She emphasized that the most important factor is communication!