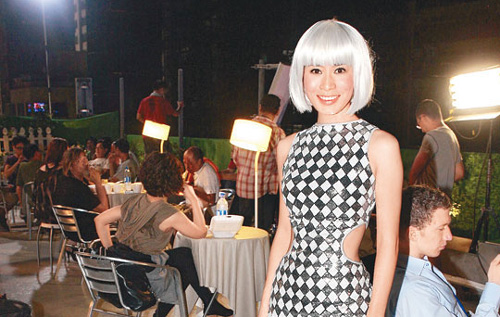 Ever since Charmaine Sheh (佘詩曼)  broke away “biological” relations with TVB, chances of reprising her past position as TVB Anniversary Awards’ TV Queen doesn’t look too optimistic this year. In reply to this, Charmaine self-professed that she understands the rules of the game thus she will concentrate on filming dramas in mainland China. As for the TV Queen award this year, amongst the hot contenders, Charmaine looked highly upon Linda Chung (鍾嘉欣) and Myolie Wu (胡杏兒) while for the TV King award, Charmaine, of course, thought highly of her long-time good friend, Michael Tse (謝天華).

*Warning: Possible spoilers for new drama 4 In Love ahead*

Although Charmaine was no longer under a TVB management contract, she has in recent days been busy filming TVB new drama, 4 In Love. Yesterday night, the drama team were filming an outdoor scene on a building’s rooftop in Mongkok’s Sai Yeung Choi Street. Charmaine Sheh donned a 60’s image for the drama and proved to be extremely eye-catching in it. She then started filming with Florence Kwok (郭少芸) and more than thirty temporary actors, some of whom were people of other nationalities.

As it turned out, the scene was about Charmaine (who portrays an actress in this drama) filming a science-fiction thriller in Hollywood. Thus, Charmaine was required to wear white contact lens from time to time. Charmaine continued, “Your vision will turn blurry with these white contact lenses on. Thus, it was rather tough (filming in these).”

When mentioned of TVB’s Anniversary Awards ceremony at year-end and how viewers were starting to look out for signs of the hot contenders for the TV King and Queen awards respectively, Charmaine was also asked for her predictions. In reply to this, Charmaine responded, “For TV King, there is no need to ask, I would surely pick Laughing-Gor Michael Tse! Since we (Michael and I) are friends, of course I will support him first! I also know that the viewership ratings for Lives of Omission <潛行狙擊> has been great. If there is a need to pick, I think it would be hard on us.”

When asked about the selection for TV Queen, Charmaine noted, “Linda Chung’s performance in Yes Sir Sorry Sir <點解阿Sir係阿Sir> and Myolie Wu’s performance in The Rippling Blossom <魚躍在花見> were both good.” (What about yourself? Do you have any confidence?) “For me, I really don’t think I have the chance lahs! Because I might not be able to attend the ceremony as I need to rush back to mainland in September to film Mainland drama, The Legend of Yuan Empire Founder <建元風雲>.”

In other news, filming outdoors in such a humid weather has proved to be an extremely difficult task for the cast and crew. However, Charmaine still acted with professionalism and responded that shooting at night wasn’t considered that tough already (as compared to filming in the day).