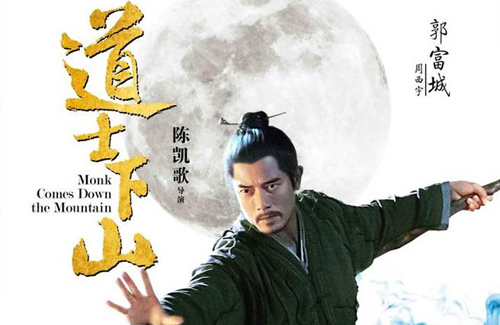 Director Chen Kaige’s (陳凱歌) newest fantasy-adventure film, Monk Comes Down the Mountain <道士下山>, opened in theaters on July 3. While it earned impressive results at the box office, viewer reactions have been mixed, especially regarding a questionable scene between actors Aaron Kwok (郭富城) and Chang Chen (張震).

Monk Comes Down the Mountain stars Wang Baoqiang (王寶強) as young Daoist monk He Anxia, whose master sends him into the world to procure food for their famine-ridden temple. Along the way, Anxia meets a large cast of characters, including Zhou Xiyu (Aaron Kwok) and Zhou’s close friend Cha (Chang Chen).

In one scene in Monk Comes Down the Mountain, Zhou and Cha are seen rolling around on a meadow in order to avoid being shot by artillery fire. Many viewers found the scene comical and surmised that it hinted at a bromance between the two characters.

When asked about whether or not the bromance was intentional, Chen Kaige replied that, in his personal opinion, “the two of them share a brotherly love. Two men who don’t have a way to survive find each other and become friends in life or in death.”

Chen added that when he was in the army, where more than 20 men lived in a single house, it was normal for men to be in such close proximity to one another. Moreover, it was “rather realistic” for Zhou and Cha to be rolling around in the meadow, “because otherwise they would have been killed.”

However, Chen stated that he would not be particularly opposed to the idea if viewers wanted to interpret the characters’ friendship as something more. After all, “viewers have the right to see it the way they want,” he said.

Chen Kaige: “I Will Accept Criticism Without Question”

Although Monk Comes Down the Mountain officially screened starting July 3, some theaters featured early-release screenings on the evening of July 2. In those six hours, the film already reached 43 million RMB in box-office sales, setting a new record for single-evening sales in the mainland Chinese market. The movie’s box office reached 102 million RMB the following day.

Despite the film’s commercial success so far, Monk Comes Down the Mountain has received its fair share of criticism – a situation quite similar to Chen Kaige’s 2005 film The Promise <無極> , which achieved moderate box-office success in its first week but was widely panned by critics.

“I’ve been in this business for so many years and experienced many things, so of course I think it’s normal for audiences to have different types of reactions,” Chen said in an interview with Yangcheng Evening News. “But to tell the truth, some criticism has kind intentions, while some has ill intentions. There’s nothing to be done about it – the film environment makes it this way.

“From my own point of view,” he went on, “no matter if [the criticism] is well- or ill-intended, I will accept them all without question.”

Chen also hinted that some of the directing choices in Monk Comes Down the Mountain were not by his decision alone. “There’s something special about being a movie director in China,” he shared. “Not everything is decided by you, but the responsibility is entirely on you.”

Monk Comes Down the Mountain, which also stars Lin Chi Ling (林志玲) and Fan Wei (范偉), is based on a novel of the same name, which was written by mainland Chinese director-writer Xu Haofeng (徐皓峰). Last year, Xu won a Hong Kong Film Award for his work on the screenplay of The Grandmaster <一代宗師>.

“Monk Comes Down the Mountain” Trailer