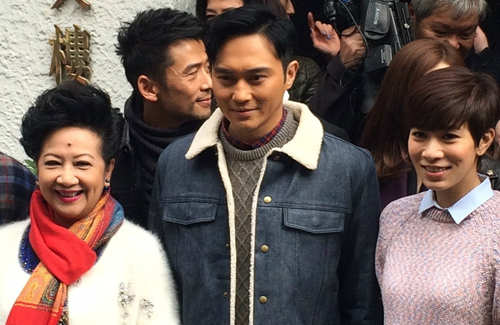 Chilam Cheung (張智霖) and Charmaine Sheh (佘詩曼) promoted their new movie, Return of the Cuckoo <十月初五的月光>, in Macau today. The lead stars were greeted by an enthusiastic crowd of fans.

Fourteen years ago, Chilam and Charmaine were a memorable pairing in TVB drama, Return of the Cuckoo. In November, director Patrick Kong (葉念琛) announced filming a movie version to continue the story where the drama left off. The cast and crew has been filming in Macau.

Touring Macau on a double decker bus to reminisce their filming experience, Chilam and Charmaine were surrounded by their loving fans as soon as they stepped off the bus. Despite the hundreds of people that huddled around them, the stars warmly greeted everyone and shook hands with them. The cast also handed out holiday presents to pedestrians.

With her pixie cut and plain jeans, Charmaine looked exactly like her character from the classic TVB drama. Not having aged one bit since then, Charmaine expressed, “I feel like everyone here hasn’t changed at all! My mom – Nancy Sit (薛家燕), my dad – Kwok Fung (郭峰) too.”

Another Baby For Chilam Cheung?

Chilam and wife Anita Yuen (袁詠議) put a lot of effort in raising their son, Morton Cheung. Now that Morton is eight years old, it is rumored that the couple plans to have another baby. Chilam said he would let things fall into place naturally. “To have a second one would be great, but I’ll be happy even if there’s only one [child]. I’m easily fulfilled.”