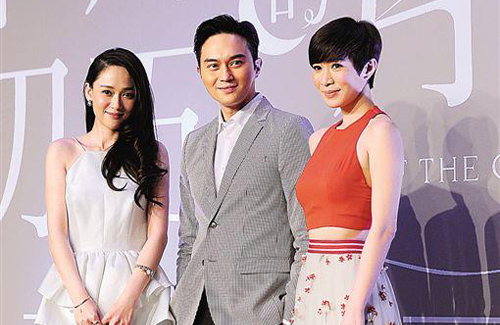 Charmaine Sheh (佘詩曼) and Chilam Cheung (張智霖) have been perceived as a golden onscreen couple since their collaboration in the TVB drama, Return of the Cuckoo <十月初五的月光>. Reuniting in the film version 15 years later, Charmaine and Chilam were cautious in their interaction during filming of the movie to avoid fanning previous romantic rumors.

Asked how she felt working with Chilam again after a long lapse, Charmaine smiled and responded, “Chilam is still the very beloved brother. There is a romantic element, but we currently have not had contact yet [in the film].”

Standing beside Charmaine, Chilam said, “Work is work. This time, we’re both very engrossed [in our characters] and will think about the approach of the film. If [you have] watched Return of the Cuckoo, then you know that our relationship is very complicated. Our feelings have transcended beyond romance. Actually, this doesn’t apply to just the characters in the film, but is also the audiences’ overall feelings.” He added, “It actually has been many years. I think there’s a need to grow with the characters.”

Chilam revealed that he will have romantic storylines with both Charmaine and Joe Chen (陳喬恩), who portrays a mute girl. “The love triangle needs time to develop. There will be more entanglements!”