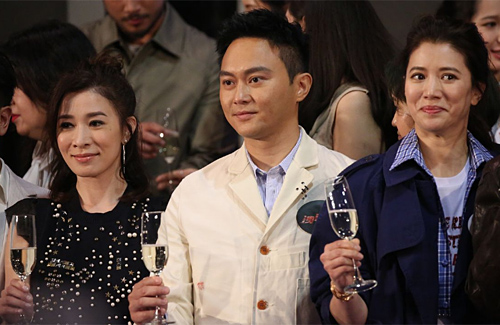 Generating romantic rumors while working in several TVB dramas before, Chilam and Charmaine did not feel awkward while filming The Leaker. The pair had co-starred in several recent films together, including a film adaptation of Return of the Cuckoo <十月初五的月光> in 2015. Charmaine pointed out that she has more scenes opposite Francis Ng, and only one major scene with Chilam in The Leaker.

During the group press photos, Chilam’s wife Anita Yuen (袁詠儀) was standing awkwardly next to Charmaine Sheh. Noticing that Chilam was only two spaces away, Charmaine reached over and asked him to stand between the women instead. Afterward, the women toasted their champagne glasses together.

Asked if she knew Charmaine well, Anita said, “No”. When prompted about Charmaine and Chilam’s former rumors, Anita tried to lighten the situation and said, “I would be very busy if I reacted to all of Chilam’s rumors.”

Speaking with the press afterward, Chilam said, “There were name labels on the floor telling where the artistes to stand. I saw Cheung and thought I was supposed to stand there, but it turned out to be Cheung Tat Ming‘s (張達明) spot instead.” Chilam added that he often runs into Charmaine at parties, so he does not feel awkward working with her.