Embroiled in scandals recently, the most recent being an ex-employee who shared photos of the actress taking a smoke, Angelababy’s (楊穎) troubles look set to increase, as more talk of restrictive guidelines on C-dramas emerge, including an alleged ban on artistes who have done plastic surgery! 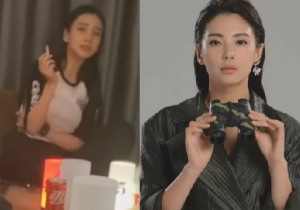 Latest word has it that Chinese drama production teams have to abide by a set of five prohibitive guidelines:

(i) military dramas cannot include romantic themes; (ii) artistes must use real names on their identification papers and not English names; (iii) period costumes have to be historically accurate and not overly exaggerated or glorified; (iv) prohibited casting of artistes who have had plastic surgery and (v) required close supervision of artistes’ tax declaration and that of their registered companies. While seemingly proving the veracity of scriptwriter Hailin Wang’s (汪海林) exposé, it turns out the ban on English names applies only to dramas and not individual artistes’ social profiles.

Artistes in Danger of Drama Boycott
Beside the name restriction, the ban on artistes who had plastic surgery done again brings Angelababy to mind, as her vastly different looks before and after entering entertainment have long set tongues wagging. Despite the actress once getting a verification done at a hospital to deny plastic surgery work, netizens were not entirely convinced. To avoid their works from getting implicated, many production firms are very likely to avoid casting artistes plagued by surgery rumors.

Besides Angelababy, netizens have named other artistes in danger of being boycotted, including her ex-husband Huang Xiaoming (黃曉明), in addition to Wang Yibo (王一博), Kitty Zhang (張雨綺) and Ju Jingyi (鞠婧禕).

While current restrictions apply only to dramas as China Film Administration and the party’s publicity department has yet to announce new measures for films, it certainly looks as if actor and producer Donnie Yen (甄子丹), who earlier pledged to avoid casting female stars suspected of having done plastic surgery might just be ahead of his time, as the same guidelines are very likely to apply for the film industry, with it being merely a matter of time.

Angelababy Receives Criticism for Acting
Appearing in an elegant white bridal dress while wielding a gun for upcoming miniseries Back For You <漫影尋踪>, Angelababy was again criticized by netizens for her soulless expression and stiff body language which made the scene resemble a mobile game commercial more than a drama, said comments. Despite the negative feedback, the actress’s work studio has not been letting up on publicity efforts, as it shared new photos of her styling for Chinese variety program It Sounds Incredible <聽說很好吃>, which revealed her slender, fair gams as she posed in a youthful black outfit.