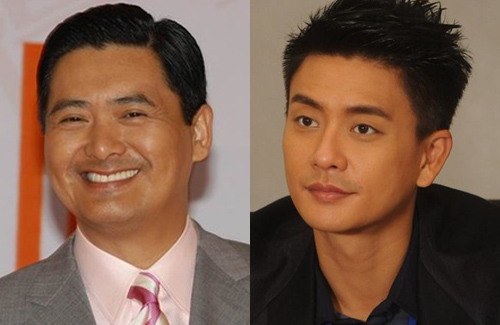 Chow Yun Fat (周潤發) has been closely watching Bosco Wong’s (黃宗澤) career, expressing that he believes it is time for Bosco to shine.

In an interview conducted in Beijing, Chow Yun Fat revealed his thoughts about TVB, the station where he first debuted as an actor in the 1970s. He has been closely following the productions of TVB, asserting that he would usually try staying up at night to watch TVB’s prime time dramas if time allows.

On which stars Chow Yun Fat believes that the audience should watch out for, he immediately named Moses Chan (陳豪), Vincent Wong ( 王浩信), and Raymond Wong (黃浩然). He also said,  “Bobby Au Yeung (歐陽震華) has already become a legend… and Bosco Wong (黃宗澤). It’s about time for him to move out [of TVB]. Michael Tse (謝天華) has already moved out. There actually aren’t many [TVB] siu sangs nowadays.”

Chow Yun Fat, who debuted as a TVB television actor, added that it is not an easy task to move from television to film. “These things require a lot of time to adjust, especially when you’ve been in the television industry for a really long time.”

As long as there is a good script with a good schedule, Chow Yun Fat said he would be glad to return to TVB to film a television drama. Although there are still many challenges that the Hong Kong television industry has to face due to its limited market, Chow Yun Fat will continue to support TVB in the future.

Chow Yun Fat has starred in numerous international Hollywood films through the years, including Anna and the King, Bulletproof Monk, and Pirates of the Caribbean: At World’s End, but in the last few years, Chow Yun Fat retreated from the Hollywood scene to star in lesser-scale films. This weekend, Chow Yun Fat’s two Hong Kong films, The Monkey King <西遊記之大鬧天宮> and From Vegas to Macau <賭城風雲>, will be competing each other at the box office.

Despite his break from the global scene, Chow Yun Fat is still interested in filming for Hollywood when the opportunity arises. “You’re always learning something and going through new experiences with different people. Filming for [Hollywood] has been quite unforgettable because you get to see the differences in production. I benefit from these experiences every time.”

Though Chow Yun Fat has lived in the United States and mainland China for some time in the past, his permanent home had always been in Hong Kong. “If grew up here. I am used to the food and lifestyle. The only time when I go to the mainland or the United States is when I’m working.”

Currently 58 years old, Chow Yun Fat said he has no desire to retire. He said, “If there is a day when I will forget my dialogue and impede everyone’s schedule, then I will stop acting.”