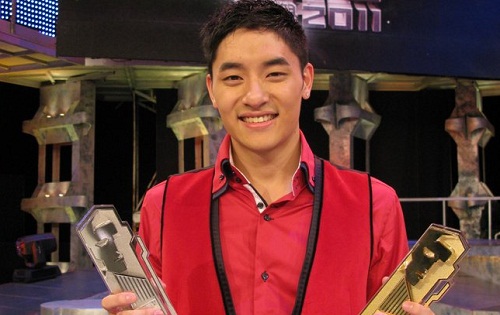 Twenty-four-year-old Clayton Li was 5 feet 10 inches tall and weighed 148 pounds. A college student, his interests included sports and drawing. His goal was to become an international actor. Elisabeth Zhang (張天愛) was the guest presenter who gave Clayton his award.

The first contestant to receive an award for the evening was #1 Edmond Siu (蕭家浩), who won the iMr Award. Twenty-five-year-old Edmond possessed a 6-feet frame and weighed 145 pounds.  He was a model and his interests included singing and make-up. His goal was to become an actor. Edmond received the iMr Award from Carol Cheng (鄭裕玲).

The contestants in the 2011 Mr. Hong Kong Contest used all possible ways to win awards for themselves.  Contestant #2, Honda Hui (許鴻達) performed opera singing and morphed into Warren Mok (莫華倫). Contestant #9 Aleyson Shu (舒宇表) performed martial arts and a flip jump. Contestant #3 Derek Wong (黃建東) won the Best Potential in Acting Award for his perform of a self-created song, in which he played the music and wrote his own lyrics. Derek’s goal was to become an artist in television, film and music industries and his award in the 2011 Mr. Hong Kong contest was his step towards a successful career.

In the Final Four round, Carol Cheng announced the scoring for the top four finalists: #1 Edmond Siu received 148 points; #6 Kit Fong (方世杰) received 82 points; #12 Hugo Lam (林志勇) got  69 points; and #10  Clayton Li  received the highest number of votes with 182 to beat other opponents in winning the 2011 Mr. Hong Kong title. Jayne: Congratulations to Clayton Li! He’s good looking but his Chinese only appears mediocre as he used a lot of English in earlier promotional clips. I think his body won him a lot of points.