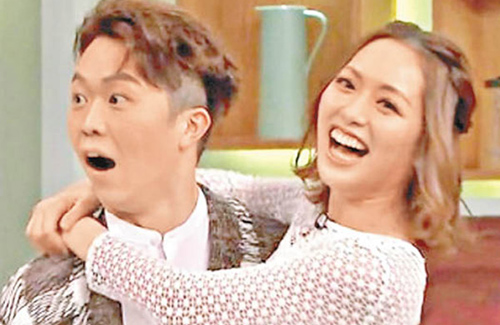 Crystal Fung (馮盈盈) split with her long-time doctor boyfriend Martin last December, and both parties have moved on with new love interests. It is rumored that the 25-year-old actress is secretly dating television host, Leonard Cheng (鄭衍峰), for three months already.

Not long after her breakup, some fans noticed Crystal shopping at a grocery store with a man on New Year’s Eve. Recognizing that the man’s identity is 28-year-old TVB artiste, Leonard, netizens speculated that the pair has been dating since then.

Everyone Has a Chance

Crystal and Leonard became good friends last November when they flew to Vancouver for the filming of the popular talk show, Young and Restless <後生仔傾吓偈>. In one particular episode, the crew organized to have nine contestants confess their love for Crystal during a speed dating segment, but she personally asked to have Leonard join the game. While filming, the two were seen to be very cozy with each other, and Leonard even carried Crystal bridal style.

Earlier, when Crystal drove herself to work, the actress didn’t park in the underground lot near TVB Studios. Instead, she parked further way on the side of the streets and Leonard picked up Crystal’s car and drove off.

When confronted during an interview, Crystal casually said, “We’re only good friends. Going out to have dinner with friends after just meeting them is very normal. I’m very open about my relationship status – everyone has a chance here, but I hope to get to know each other first. Thanks for the concern, but I’m not in a hurry. I want to take things slowly and meet new friends. I hope everyone can give me some space and hopefully not ruin everything for me!”

Asked why she let Leonard drive her car, Crystal replied, “It’s very normal to let friends drive my car – a lot of people have driven it before. Sometimes when I’m working and my car is out of battery, I get my coworkers to help too.”

Leonard also stressed that he and Crystal are only friends. He stated, “I’m only friends with Crystal – friends need time to get to know each other. Even if I wanted to, I’m sure she has a lot of options. I guess I do have to thank everyone for saying that we’re a match! She lets a lot of people drive her car, and I was only helping her to get the car charged because it was out of battery.”