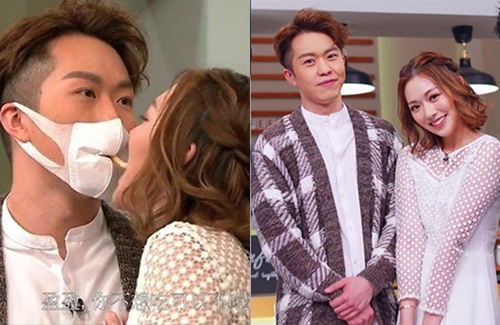 Last December, Crystal Fung (馮盈盈) confirmed her split with doctor boyfriend Martin Chung (鍾文浩), who she had for four years. Since the breakup, Hong Kong paparazzi had been on a frenzy run to get more insight on the MHK winner’s private life, and after months of following the actress, the paparazzi finally managed to turn in some homework.

Rumored to be dating 28-year-old Leonard Cheng (鄭衍峰), best known for hosting TVB’s Fun Abroad <3日2夜> series, paparazzi speculated that the two could be in a serious relationship, as Leonard was seen driving Crystal’s HK$600,000 car. The gossip mags then did some more digging, and reported that Leonard came from a wealthy family—his father was reportedly an aircraft engineer, and Leonard himself was raised in Vancouver, Canada.

However, only part of what was reported was true—Leonard is definitely from Canada, and graduated from the University of British Columbia. What wasn’t true was the claim that his parents were rich—according to new sources, Leonard grew up in a public housing complex in Richmond, British Columbia. His mother used to work as a sales associate at an electronics store, and his father is a mechanic for an airline.

Leonard was reached out for comment in regard to the reports on his family’s wealth. He replied, “I don’t want to talk about my family. I’m sorry!”