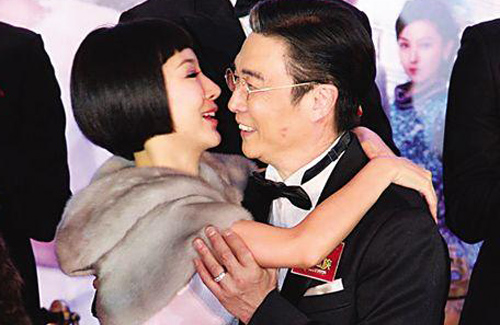 During the filming of Silver Spoon, Sterling Shackles, Sire reportedly behaved flirtatiously with Damian in hopes of increasing her screen-time with the veteran actor, who had the clout to change scripts to suit his preferences. Eyewitnesses on the set saw Sire clinging by Damian’s side and behaving flirtatiously.

Despite his romantic rumors resurfacing, Damian faced the press directly and supported Sire. Damian denied that Sire had sent him any steamy video clips, “No I haven’t received them.” Damian also added, “She is so brave to face the situation!” However, he declined to comment whether his wife was upset by the romantic allegations.

Damian disclosed that the cast from Silver Spoon, Sterling Shackles remain very close with each other, and often connect through their chat group. Playing Sire’s mom in the series, Mary Hon (韓馬利) was the first out of the group to find out about Sire’s troubles, and backed Sire on the matter. Mary explained, “The Sire I know is very respectful towards seniors and is a very hardworking actress.” Mary also does not believe that Damian was the senior actor that Sire had sent steamy messages to.