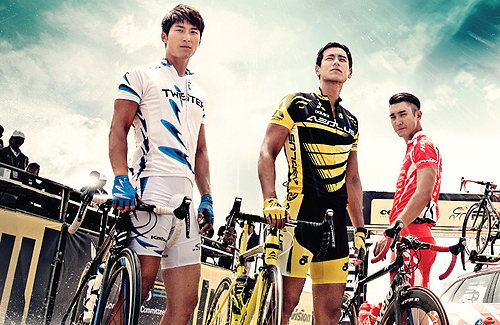 On August 7, director Dante Lam’s (林超賢) newest film, To The Fore <破風>, opened in theaters. Dante hopes that To The Fore, which talks about competitive cycling, will open up a new path for Hong Kong cinema.

In To The Fore, Taiwanese actor Eddie Peng (彭于晏) stars as a professional cyclist’s pacesetter – a title given to a less advanced cyclist who pedals in front of the professional cyclist in order to maintain the speed and decrease wind resistance. Drawing a line between the cycling world and his personal experience, Dante shared that To The Fore only came to be because he himself had pacesetters in the film industry.

“Just like cyclists need pacesetters to block the wind and rain, I once was a pacesetter for other filmmakers,” said Dante. “Now, it’s because I had pacesetters myself that I became who I am.”

Dante, who has wanted to film a cycling-related movie since 2001, is aware that he faces many challenges, especially since To The Fore is the first Chinese-language film about cycling. However, he hopes that the film will convey to the audience the feeling of “unswerving determination” that he experiences when he goes biking.

“When you’re pedaling up a mountain, it’s a big test,” he shared. “A mountain is like the road of life. You look toward the mountaintop, and along the way, there are many things that make you want to give up. If you stop, others will surpass you, and letting go is not that easy. I gain a lot of understanding when I go biking.”

Much like his previous film, Unbeatable <激戰>, To The Fore again challenges the physical stamina and limitations of its cast. Eddie Peng, who also starred in Unbeatable, spent four to five months filming for this movie, and an additional three months in special bicycling training. Korean actor Choi Siwon also hired a professional instructor and continually kept Dante updated on his progress.

On Siwon’s first day on set, he was scheduled to film a cycling competition. He ended up working so hard that he threw up. Later, Siwon erupted in anger after filming a difficult scene; although Dante was afraid that Siwon would be hard to communicate with, he learned afterward that the actor was simply frustrated that he could not perform to the best of his abilities.

The cast and crew of To The Fore also ran into many weather problems. Dante had scheduled a desert scene to give the movie an exciting ending. Unfortunately, he did not account for the unstable weather, which darkened the sky and dumped pouring rain on the cast and crew.