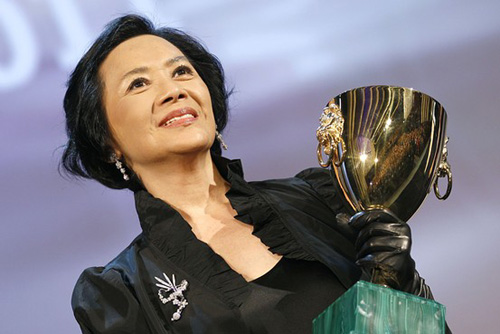 Through her stellar performance in A Simple Life <桃姐>, Deanie Ip (叶德娴) won the Best Actress Award at the 68th Annual Venice Film Festival. At the press conference, the judges praised Deanie as a young, beautiful, sexy, and gifted actress whose portrayal of a lonely elderly woman was extremely accurate. It was a well deserved win for Deanie Ip, who noted that aside from bringing her awards, A Simple Life also brought about new recognition in her life, “I am no longer young and it reminds me to start planning for old age. I do not want to become a burden. When I return [to Hong Kong], I will have to live in a nursing home too!” Director Ann Hui ( 许鞍华) also echoed, “And I have to go to the nursing home where we filmed A Simple Life.” As a “surprise film” at the 68th Annual Film Festival, China’s People Mountain People Sea <人山人海> helped Director Cai Shangjun (蔡尚君) win the Silver Lion in best direction. At the press conference, Cai Shangjun indicated that winning the award was unexpected and that this was the festival of Chinese films and served as a great encouragement to young directors.

Asked to comment about the film’s star, Chen Jianbin (陈建斌), Cai Shangjun noted that they had known each other since school and have been working together. The second day after Chen Jianbin read the script, he promised to participate in the film and thus, the two men were “like-minded.” The judges also gave People Mountain People Sea high marks, praising it for creating a “world one never saw before and did not wish to see.”