Jason Chan Takes One Step at a Time 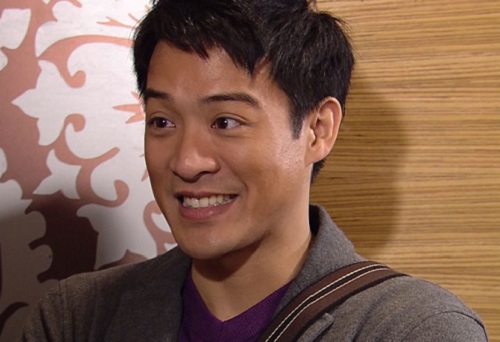 The handsome and well-educated Jason Chan (陳智燊) did not regret one bit for starting an entertainment career in the Hong Kong television industry. An alumni of London’s School of Oriental and African Studies, Jason is well-versed in Chinese, English, French, and Latin. After graduation, he was hired in a well-paying managing job in a London hospital, but as the months went by, Jason grew more and more apathetic towards his occupation. In 2003, Jason finally quit his job and left for Hong Kong.

Jason said, “When I was 18, I often had dreams of becoming a celebrity. Unlike most of my friends, who all endeavored to be professionals, I didn’t know what to do for my future when I entered college. After graduation, I found an administrative job at a hospital. I did not like it at all. It was then when my celebrity dreams came back.”

Jason graduated from TVB’s artist training class in 2005 and immediately got a hosting gig in TVB’s English station, Pearl. Jason soon became one of the channel’s main program anchors. Although Jason enjoyed hosting, he hoped to achieve a name in acting as well. He earned his first major role in 2008’s Pages of Treasures <Click入黄金屋>, portraying Shirley Yeung’s (楊思琦). “Patrick.” Since the drama had lukewarm responses, and Jason went back to hosting English programs and occasionally making cameo appearances in various TVB dramas.

It was not until 2011’s Be Home for Dinner <誰家灶頭無煙火> when Jason finally began to make his name as an actor. Many film producers also began to seek out Jason, and following the months of Be Home for Dinner’s broadcast, Jason was cast in supporting roles in Patrick Kong’s (葉念琛) Love is the Only Answer <人約離婚後> and Ann Hui’s (許鞍華) A Simple Life <桃姐>. Jason exclaimed, “I’ve worked with Patrick before. His filming pace is really fast, so it is not much different from filming dramas. I am very happy that I had a chance to film A Simple Life, but my mom was the happiest because she is a super big fan of Andy Lau (劉德華)!”

Jason once said that he joined the TVB artist training class with one goal in mind: to eventually become a leading actor. Jason quickly explained, “I said that because it represents good results.  I do not necessarily need to be a leading actor to be satisfied. When a role does not suit you, it does not suit you. I will leave all the decision-making to the producers.”

Jason continued, “I am a very easy-going person. I do not control my chances, and I will not be stubborn about them. Right now, my career direction is to hold onto all the new opportunities given to me. I will do my best.”

Still Has Much to Learn

It has been said that TVB has intentions to promote Jason as “the second Moses Chan (陳豪).” Jason smiled, “Sometimes you have to leave things to fate. I cannot impose upon it. I still have many things left to try.”

Although born and bred in the United Kingdom, Jason has been a fan of Hong Kong dramas since youth. Andy Lau and Idy Chan’s (陳玉蓮) The Return of the Condor Heroes <神鵰俠侶> is one of his all-time favorites, “I had no acting experience before joining the industry. Therefore, I watched a lot of dramas and films, hoping that I would be able to put what I learned into practice.”

When discussing about the roles he would like to try in the future, Jason said, “I want to do something similar to the Burning Flame <烈火雄心> series. I think portraying a character from the disciplinary forces would be really challenging.”

Too Busy to Go Back Home

Jason wanted to go back to his London home to support the 2012 London Olympics, but after he was cast in Blissful Ferris Wheel, he decided to stay in Hong Kong so he would not lose the opportunity. Jason is very close to his family, and would try his best to find time to return home, “I always fought with my siblings when I was younger, but now, we are best friends and we talk about everything with each other. I hope that I’ll have the time to return to London at least once a year.”

Whenever Jason has a chance to return to London, he will work as a waiter his parents’ restaurant, “I don’t know how to cook. If I work in the kitchen, I’ll just make life harder for everyone.”

TAGS: A Simple Life, Andy Lau, Be Home for Dinner, Jason Chan, Love is the Only Answer, Patrick Kong

8 comments to Jason Chan Takes One Step at a Time